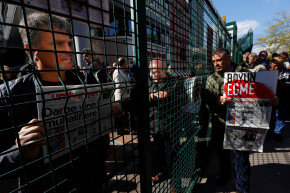 A Record Number Of Journalists Are Now In Jail

The Committee to Protect Journalists released its annual report, and the outlook isn't good

Supporters of an opposition newspaper protest in Turkey — REUTERS
By Allee Manning
Dec 13, 2016 at 6:11 PM ET

There are now more journalists behind bars for doing their jobs than at any point in recent history.

According to a new report from the Committee to Protect Journalists, 259 journalists around the world are imprisoned. That’s 27 more journalists than at any another point in the 26 years that the Committee has been collecting this data, and up 60 people from last year. This year, the majority of those imprisoned were working for internet-based publications.

The country with the highest number of journalists are behind bars is Turkey, where at least 81 journalists are currently being held, all of whom face what CPJ defines as anti-state charges, for work that goes against the interests of the government.

The drastic increase from this time last year, when only 14 Turkish journalists were serving time for their work, comes after the failed coup of the president Recep Tayyip Erdogan in July, and the government crackdown it led to. In the immediate aftermath of the attempted overthrow, at least 100 journalists were detained. One hundred and fifty news outlets have also been shut down.

China (which filled the top slot the past two years in a row), Egypt, Eritrea, and Ethiopia round out the top five countries with the highest populations of imprisoned journalists. It was the first year in eight years that Iran did not appear on the list.

Like Turkey, Egypt is also currently experiencing unprecedented levels of press imprisonment under President Abdel Fattah el-Sisi. In the years prior to his election, there was only one journalist imprisoned within the country each year, on average. That figure has now reached 25, up from 23 last year.

The most common reason that journalists were jailed this year was for publishing anti-state materials, a charge that does not indicate that their coverage was biased or even inaccurate.

None of the jailed journalists are in the United States, but the president-elect Donald Trump has raised eyebrows for his adversarial approach to journalism. He stated that he intends to “open up” libel laws, and the Committee to Protect Journalists’ chairman declared him “a threat to press freedom” a month before the election.

In addition to the 259 reporters in jail, 45 have died from work-related incidents this year. Syria remains the deadliest country for journalists; 14 reporters covering the nation’s civil war died doing their work in 2016.