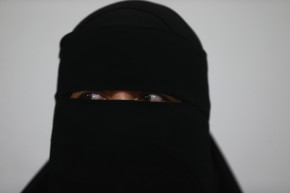 Woman In Saudi Arabia Arrested After Posting Photo Without Hijab

Women in Saudi Arabia are expected to covered like the one seen here — REUTERS
By Leeron Hoory
Dec 13, 2016 at 4:50 PM ET

Authorities in Saudi Arabia on Monday said they arrested a 21-year-old woman for posting an image of herself in public without her hijab or abaya, a full length, loose fitting robe women are required to wear, late last month. According to the Washington Post, the woman was going out for breakfast when she had this picture taken.

A Saudi woman went out yesterday without an Abaya or a hijab in Riyadh Saudi Arabia and many Saudis are now demanding her execution. pic.twitter.com/gPMOz5bRAr

Fawaz al-Maiman, a spokesman for the police department in the capital city of Riyadh, said that they arrested her in order to monitor “violations of general morals,” AFP reported. “Riyadh police stress that the action of this woman violates the laws applied in this country,” Maiman said. He also accused her of “speaking openly about prohibited relations with (non-related) men”.

Though the police did not reveal her identity, a few local websites identified her as Malak al-Shehri, who posted on Twitter two weeks ago that she plans to go out in public without her hijab or abaya, and later followed up on this announcement with a photo of herself in front of a popular cafe in the main street in Riyadh.

The photo triggered extreme social media backlash, including death threats and demands to imprison her. She has since deleted her Twitter account. The incident was reported to the religious police, and eventually led to her arrest, according to the Arabic-language news site Al-Sharq, which was cited by the Guardian.

Saudi Arabia has some of the toughest restrictions on women in the world and is the only country where woman are not allowed to drive. The government polices behavior in public and punishes women who are not covered from head to toe or accompanied by male relatives. Late last month, Saudi Prince Waleed bin Talal tweeted that he thinks it’s about time women are allowed to drive, re-igniting a longstanding debate online.

However, despite these laws, in December of 2015, women were allowed to vote for the first time in the country’s history for the municipal elections.