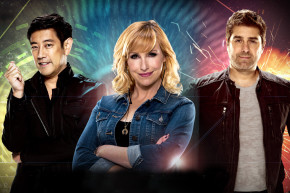 The show's build team is back with more corny jokes, explosions and crazy tech

“Mythbusters” might’ve been cancelled, but the show’s fan-favorite build team is back to go down the rabbit hole to explore what they say is a new realm of the “impossible.”

Discovery Channel’s alumni Tory Belleci, Kari Byron and Grant Imahara are back investigating the unusual events in pop culture, science and history with a new show on Netflix titled “White Rabbit Project.” The 10-episode show is very similar to “Mythbusters,” the humorous series that debunked popular urban legends and theories, except this time everything is a competition.

From delving into “tech we love to hate,” like the GPS, to recreating crazy World War II weapons, each episode presents a topic and a challenge that has mostly do to with tech and science. Then, the three cast members come up with two different scenarios each and finish the show by ranking their ideas based on a criteria they make up.

The first episode “Super Power Tech” sucks viewers right in. In it, the hosts are challenged to think of ways to use technology to replicate superpowers often seen in comic books. The three hosts were able to fly, achieve mind control, create a freeze gun, go invisible, control electricity and harness super strength. The whole episode broke down how each superpower can be used in real life, its practicality and its cost. Whichever was the cheapest, most practical and most superpower-like, won.

Byron, who won the first challenge, was able to achieve mind control by meeting with neuroscientist Greg Gage who developed a small DIY kit of circuits that can be used to control other people’s muscles. Gage then helped Byron take control of co-host Belleci during an Italian dinner. The results were hilarious and, clearly, no one was hurt. There was a lot of wine was spilled, smeared spaghetti sauce and just some minimal pain.

The system implemented to rank their theories and pick a winner is seemingly arbitrary, since it’s not based on any strict guidelines, but at the end of each episode it doesn’t really matter who won — it’s just for bragging rights.

Other episodes in the first season go further than just explaining the technology and science behind an elaborated process, though. The hosts will also go on quick history explainers that shed light on inventors and different eras. Some examples of history dives throughout the series include a prison break from East Germany in 1979 (as portrayed in the 1982 movie “Night Crossing”) and the back story of man who put the Ponzi scheme on the map.

The technology they showcase isn’t usually new — some has already been featured by tech publications including C-Net, The Verge and Vocativ — but it’s far from mainstream, so it’s compelling to watch the tech come alive with great camera work and large props.

The best thing about the show, aside from seeing frozen vegetables and bat-filled bombs explode, is that it makes learning about science, technology and history a bit more fun. The enthusiasm the hosts have toward their creations is contagious and steers the viewers from thinking math and science is dull and lame.

“White Rabbit Project” definitely builds on the legacy of “Mythbusters,” but it’s probably more appealing to today’s generation given the fact that it streams on Netflix. The production and narrative of the show is also way smoother and understandable. The hosts are great at translating scientific and technological theories into layman’s terms.

Netflix just released the first season last weekend and is available to watch in full. There is no word yet on whether it’ll get a second season, but it probably will — Netflix has yet to cancel a show after just one season.

And matter what your take on the show is, just remember: do not attempt these projects at home.