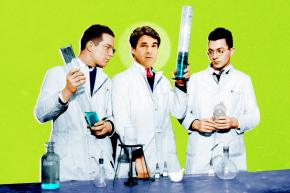 Rick Perry, Who Said ‘I’m Not A Scientist,’ To Lead Department Of Them
By Alasdair Wilkins

Rick Perry, Who Said ‘I’m Not A Scientist,’ To Lead Department Of Them

Former Texas governor Rick Perry is reportedly Donald Trump’s pick to be the next head of the Department of Energy. The move is almost too perfect a punchline, as it puts Perry in charge of the very department he couldn’t name in his legendary gaffe at a 2011 presidential debate. But Perry’s inability to remember the department’s name — and his vow to eliminate it that led to the “oops” moment in the first place — is just a hint of how little knowledge the former governor has of what the DOE actually does.

“They’ve never created one bit of energy the best I can tell,” Perry said in an October 2011 campaign stop in which he successfully named it as one of the departments he would abolish if president (his campaign-crippling gaffe would come a month later). “Our energy industry has to be freed up from the over-regulations. We need to have a domestic energy policy that is for America to be independent on our own energy within eight years.”

But today’s Department of Energy doesn’t even do much of what Perry fears. In the department’s 2017 budget request, more than a third of the proposed $35.2 billion was put toward maintaining nuclear security. Another $5.7 billion is marked for cutting-edge science research, while $6.1 billion goes toward environmental cleanup necessitated by the department’s historical handling of nuclear waste. The remaining third deals mostly with clean energy and climate change response. While Perry likely would oppose some or all of these measures, few of them have to do with what he has generally articulated as his opposition to the department, which is onerous regulation of the private energy sector.

Though it wasn’t formed until 1977, DOE is directly descended from the World War II-era Manhattan Project that developed the atomic bomb. The modern-day department carries on this legacy both by safeguarding the country’s nuclear material and by continuing cutting-edge research in the physical sciences. Calling it the Department of Energy isn’t inaccurate, considering its role in energy production and research, but it is incomplete. But the name only hints at the full breadth of the scientific research and equipment at the department’s network of facilities, which includes an antimatter-creating particle accelerator at Long Island’s Brookhaven National Laboratory and the world’s fastest supercomputer at Oak Ridge in Tennessee.

The “Department of Energy” name is something of a historical accident, a byproduct of the fact that Jimmy Carter established the department at the height of the energy crisis. At its late-70s inception, energy regulation and development really were the major priorities for the department, but its mission focus has since shifted multiple times, with its current emphasis a mix of high-end scientific research and maintenance of the country’s nuclear security. To the extent that Rick Perry has spoken in detail on the department, his understanding of its role appears to have not moved far from its Carter-era origins.

More Rick Perry Doubles Down On Bowing Out

A major part of Perry’s energy policy both as governor of Texas and as a failed presidential candidate has been a rejection of the scientific consensus on climate change. In a 2014 press event, he challenged the idea that carbon dioxide is a pollutant and argued for the expansion of fossil fuel production. He couched his criticism of climate science and the Obama administration’s environmental policies with the paradoxical disclaimer that “I’m not a scientist,” as a reason to reject the scientific consensus that planet is warming — a common Republican talking point. As energy secretary, Perry would effectively be the boss of thousands of the country’s top scientists — although he might have a bit more trouble tracking down climate experts, given the energy department has now officially refused to comply with the Trump transition’s request to turn over the names of those employees who have worked on climate policy and research.

Perry’s previous calls to do away with the department he is now set to head — compounded by his “oops” moment five years ago — are not actually unique among Republicans. They aren’t even unique among past energy secretaries: George W. Bush’s first appointee in the position, Spencer Abraham, had introduced a bill in the U.S. Senate in 1999 to abolish the department he would take over two years later. That bill offered at least some clarity on how Bush-era Republicans would have theoretically abolished a multi-billion-dollar department, with the nuclear responsibilities transferring to the Department of Defense — undoing the whole point of why Harry Truman transferred the nuclear arsenal to civilian control in the first place — and the national laboratories moving under the auspices of the National Science Foundation. Perry has never offered similar detail on the fate of the energy department’s various programs, arguing for their abolishment as part of his principled support of limited government.

“I’m not sure why we need a Department of Energy that is as broad and as big and as cumbersome as the one that we have,” Perry said in a 2014 appearance on Climate One podcast. “There are, obviously, great and good innovation that come out of the Department of Energy but I will suggest to you that we cannot afford the size and the scope of the government that we’re paying for today.”

Now that Perry is set to be the next energy secretary, it’s unlikely he will still call for the end — or even the significant reduction — of the department he controls. Spencer Abraham didn’t, and he ultimately earned relatively good reviews for his work on energy research and nuclear non-proliferation during his four-year tenure, even if environmental and alternative energy advocates criticized him for going along with the Bush administration’s industry-friendly approach. Considering Perry’s long, industry-friendly track record — including a current directorship with Energy Transfer Partners, the group attempting to build the Dakota Access Pipeline — something like Abraham’s legacy is probably a best-case scenario for the likely next secretary.