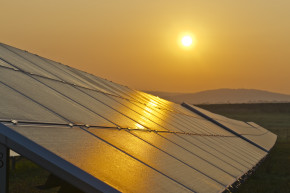 Solar Energy Is Setting Historic Records In The United States

Some hope for the future of the U.S. clean energy market

With the fossil fuel industry and its backers filling up slots for Donald Trump’s future cabinet, it hasn’t been an optimistic time for clean energy and environmental advocates. But there is one bit of good news. New data from the Solar Energy Industries Association and GTM Research shows that its been a record-breaking few months for solar energy.

In the third quarter of this year, a record amount of solar energy was installed in the United States, according to the data. And, on the whole, it’s shaping up to be another historic year for the renewable energy technology, with expectations that this fourth quarter will yield even higher results.

At a rate of one megawatt of solar photovoltaic — that’s enough to power about 164 homes — installed every 32 minutes between the months of July and September, this boom occurred at an “unprecedented rate,” according to their report. Utilities adopting large-scale solar energy projects were responsible for much of the change. (Residential solar paneling installation actually decreased slightly from the second financial quarter.) According to the associate director of U.S. solar at GTM Research, the reason so many of these solar projects came to fruition was the presumed expiration of a major tax credit that incentives solar energy use. Instead, Congress extended it through 2019.

However, the future of solar energy use within the U.S. remains somewhat up in the air. Trump hasn’t much spoken out against these tax credits, or against solar energy specifically, except in relation to the isolated occurrence of one failed solar panel company backed by the Department of Energy five years ago. He has, however, stated that he is interested in pursuing “all forms of energy,” largely as a means to the end of “making America wealthy again.” (He also has a major, personally-driven vendetta against wind farms.)

Clean energy proponent Bill Gates, who recently launched a $1 billion clean energy fund alongside other tech big-wigs like Amazon CEO Jeff Bezos, recently spoke with Trump about the importance of green energy on an eight-minute phone call. (Asked if he thinks that his appeal to the famed climate change denier on the basis of American innovation was productive, Gates offered only a vague, “Well, we’ll see.)

Still, some clean energy stakeholders fear the worst, and on Tuesday, Trump transition officials announced that former Texas governor Rick Perry is the president-elect’s top choice to lead the Energy Department. (the two-time presidential candidate who once promised to eliminate that exact department he will now head.) Still, some experts hold out hope that the rapidly decreasing price of solar energy, the momentum of the industry, and its political appeal as a domestic source of jobs will be enough to continue its growth through even a hostile federal administration.