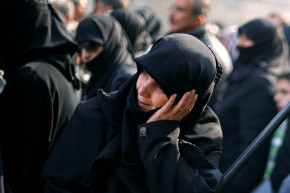 Fearing Rape, Some In Aleppo Contemplate Death
By Gilad Shiloach

Along with the countless pleas for help for the people of Aleppo in recent days comes a disturbing question many are actually debating online, as Syrians brace themselves for the city to fall and pro-government forces to exact revenge on rebels and their supporters.

“Is it permitted for a Sunni man from Aleppo to kill his wife or sister in order to save her from a rape by Shiites?” The question is circulating on social media presently, and while it is not clear who originally posted it, it has sparked debate across Facebook and Twitter, as hundreds of comments and posts react to the question.

Those posting include supporters of the Syrian opposition and many others watching the probable last days of the Aleppo campaign, and have called for a religious ruling on the matter as people remaining in the city grow more desperate each day.

I've heard of women in #Aleppo asking for fatwas to commit suicide rather than be raped by Assad forces. What is this nightmare? #savealeppo

Sheikh Abdul Razaq al-Mahdi, a Syrian affiliated with Islamist rebels north of Syria tweeted on December 4: “I received a question: Is it permitted for a Sunni who is being besieged by the Shiites to kill his wife or sister to prevent them from raping her? The answer: No, but is this how cheap the lives of Sunni women have become?”

Some were shocked the matter was even being discussed, saying it moved them to tears. Others complained that “Muslims are being exterminated and we are sitting idle. How much longer will we remain silent? Syria is just the beginning.” Some referred the questions to Muslim scholars affiliated with the Syrian opposition, while others  answered: “It is better to kill yourself.” Others said whoever was left should defend themselves, or “die as martyrs.”

For many in Syria as well as Arabs watching the conflict from afar, the war in Syria has been fought along sectarian lines. The Assad regime is rooted in the Allawite sect, a strand of Shiite Islam. Its biggest supporters in the region are the Shiite Lebanese Hezbollah and Shiite-dominated Iran. Sunni Arab states, including Gulf nations, have been funding and equipping Sunni rebels to fight the Assad regime for the past five years.

The question was posted to a Facebook page for the Bustan al-Qasr neighborhood in Aleppo. Some users “pray to God not to be in this position.” One woman wondered how anyone could ask such a question. “Don’t kill your sister or daughter,” she said. “Go and fight against your enemy.”

A woman who identified herself as Egyptian posted the question on Facebook, where one person replied that “it is a painful question and a painful answer but according to Sharia, this isn’t one of the cases that require killing.”