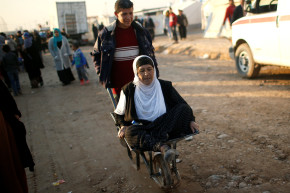 Trapped by fighting, hundreds of civilians have been caught in the crossfire

A displaced Iraqi man, who fled the Islamic State stronghold of Mosul, pushes his mother in a wheelbarrow at Khazer camp, Iraq — REUTERS
By Shira Rubin
Dec 13, 2016 at 9:01 AM ET

When a mortar exploded in the residential Mosul neighborhood of Adan on Tuesday, it hit a number of Iraqi soldiers, as well as three civilians. By the time they crossed the checkpoints and road closures on the road to the nearest field hospital, they were already dead, recalled Ammar Khamees, the founder of the Critical Needs Support Foundation, a local nongovernmental organization that provides medical supplies to field hospitals.

As fighting intensifies in Mosul, Iraq’s second largest city and ISIS stronghold, doctors on the front lines are struggling to treat the hundreds of civilians flooding into understaffed clinics every day. Khamees said that large organizations like the World Health Organization have promised to open proper field hospitals, “but this hasn’t been the first time, so I guess I’ll just hope they keep their word.”

Over the past week, 685 civilians have been injured from gunshots, mines and indirect fire, a 30 percent increase when compared to the previous week, according to the United Nations Office for the Coordination of Humanitarian Affairs. Khamees estimates that some 1,000 civilians and another 4,000 fighters have been wounded since last October.

“The operation rooms are full. We had two cases that passed away yesterday because of lack of place in the operation theater,” Midia Ghazi a volunteer doctor at a main Erbil hospital, an hour from Mosul, told the BBC earlier this month. “Sometimes we even chose those that have a chance to live and let the others pass by.”

Iraqi forces have been slowly advancing into neighborhoods and districts in the eastern part of Mosul. The fight has interrupted electricity and water supplies and caused prices on food, gasoline and other basic necessities to spike.

Foreign press has been largely restricted from the battlefronts and from liberated parts of the city, making accounts of the campaign’s progress difficult to confirm.

Unlike in past offensives, when authorities directed civilians to leave areas of violence, especially in dense urban battlegrounds like that in Mosul, Iraqi Prime Minister Haider al-Abadi instructed residents of Mosul to stay put.

The move prevented massive displacement, but also left thousands of civilians exposed to the drawn-out clashes and isolated from the clinics and aid groups stationed along the front line. It has also made them vulnerable to attacks from the terror group, which has been using families and their homes as human shields.

While around a million residents remained trapped in the city, the International Organization for Migration reported that 91,404 people have fled Mosul since October.

An activist who runs the “Mosul Eye” blog and requested anonymity said many of Mosul’s hospitals and health centers are exposed to ISIS militants.

“This war has cost us dearly and will continue to cost us and cost us,” he said, adding that if it doesn’t receive immediate aid, “Mosul will become completely destroyed.”