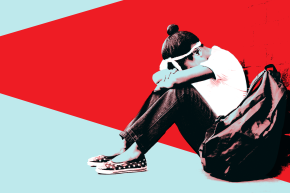 In an era where the pervasiveness of sexual harassment is steadily being acknowledged across every profession and sphere of life — from the research lab to the sidewalk — it’s not altogether surprising, if disheartening, that the roots of harassment can be found as early as middle school. At least so says this latest study out of the University of Illinois.

Researchers, led by psychologist Dorothy Espelage, conducted a five-year-long study of over 1,300 Illinois children from four different schools as they moved from fifth to eighth grade. The kids were surveyed (and a smaller group interviewed) about any and all sexual harassment they experienced in the recent past. All in all, 43% said they faced some verbal sexual harassment during the year before; 21% said they’d been touched, grabbed, or pinched in a sexual way; and another 18% percent said they were brushed up against in an inappropriate manner.

“What was most surprising and concerning was that these young people were dismissive of these experiences, even though they described them as very upsetting,” Espelage, now a professor at the University of Florida, said in a statement.

Just as worrying, much of the harassment kids experienced veered straight into homophobic bullying, especially among boys.  Sixteen percent said they had been picked on using homophobic slurs or jokes, while 5% said it happened frequently. This sort of bullying had its start in fifth or sixth grade, Espelage explained, and kids who didn’t think sexual harassment was a big deal were more likely to engage in it.

There were also subtle differences between how certain groups of kids experienced harassment and assault. White kids usually got the brunt from students and friends in their same age group, but black victims were more likely to be bullied or assaulted by older kids or even their own romantic partners. Predictably, if sadly, boys were the majority of bullies, both to girls and boys, but girls were more likely to be sexually harassed.

“Students failed to recognize the seriousness of these behaviors — in part because teachers and school officials failed to address them,” said Espelage. When her group interviewed the adults in the room, they were much less likely to admit harassment was even happening on school grounds, while others weren’t sure they had to report or otherwise protect their students from harassment, as per district and federal policies.

“These findings highlight the importance of making sexual harassment prevention efforts a priority in U.S. school districts,” Espelage said. “Schools need to have a consistently enforced policy that clearly defines sexual harassment and establishes regulations against engaging in such behavior.”

The study was published last month in Children and Youth Services Review.