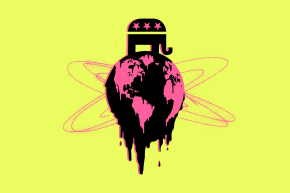 How To Talk To Conservatives About Climate Change
By Alasdair Wilkins

How To Talk To Conservatives About Climate Change

The key may be focusing on the past, rather than concerns for the future

Nothing imperils humanity’s future like global warming, and that very fact may help explain why conservatives are generally so skeptical of climate science.

After all, conservatism first emerged as a defense of tradition against progressive change, so why would conservatives care about preserving a future they already view with suspicion? That’s the argument a new study puts forward, and it points to a possible better way to talk about the environment with those skeptical of climate science.

Although 97 percent of climate scientists agree that the Earth is getting hotter and human activity is a primary cause, the public is far more divided. A recent Pew Research poll was just the latest of dozens of polls to demonstrate the profound partisan split on climate issues, with 70 percent of liberal Democrats saying they trusted climate scientists compared with just 15 percent of conservative Republicans. And so-called climate change deniers will soon hold pretty much all the power in the United States, with Donald Trump set to become the only head of state on the planet who rejects climate science. If ever there was a time for a renewed effort to change the minds of conservatives — if not Trump, then at least friends and family who voted him in— about climate change, the time is now.

Researchers at Germany’s University of Cologne ran a series of online surveys with a range of 200 to 300 American participants from across the political spectrum. They worked on the assumption that conservatism has historically been about preserving the traditional status quo in the face of change, whereas liberals tend to see such change as necessary to building a better tomorrow. In other words, conservatives look fondly on the past and are wary of the future, with the situation reversed for liberals. Calls for dealing with climate change that are rooted in protecting the planet for future generations might then not be persuasive to conservatives, particularly when they associate such environmental messages with liberal efforts to change society for the worse.

Are these broad generalizations? Absolutely. But broad generalizations can be useful, and the results from the surveys seem to bear out the researchers’ hypothesis. In one survey, the participants would see one of two nearly identical messages. While one talked about how “there is increasing traffic on the road, the air is becoming polluted, and land is disappearing,” the other noted how, in the past, “there was less traffic on the road, the air was clean, and there was plenty of land.” One talked about wanting to make future generations proud, while the other worried about doing right by the founding fathers.

Conservative participants consistently liked the past-focused message better than the forward-looking ones. Liberal participants somewhat preferred the future-centric messages, but they generally responded positively to pro-environmental messages of any stripe. They found that switching the focus of global warming messaging towards the past was enough to erase 77 percent of the opinion gap between liberals and conservatives.

It’s a small study, as the researchers note, but the results make intuitive sense, and they suggest conservative skepticism toward climate change isn’t simply a matter of scientific illiteracy. This preference for the past can’t explain the entire political divide on the issue, particularly since it doesn’t deal with how economics can incentivize people to doubt climate science in the name of short-term financial gain, another phenomenon observed in studies elsewhere. Still, it’s a start towards more productive discourse.

So then, if you’re looking to talk about the value of protecting the environment with a conservative loved one, you could try mentioning, say, the founding fathers, Theodore Roosevelt’s work in setting up the national parks, and a return to the past’s unspoiled wilderness. Even if it doesn’t change any minds, that doesn’t sound like the most unpleasant political conversation one could have around the holidays.