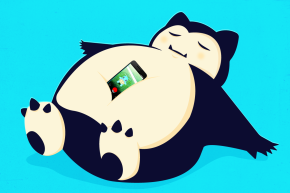 iPhone tracking data show that players did increase their activity, but the effect was short-lived

Watching her friend Christian Suharlim go running for the first time in their four-year friendship in hot pursuit of the virtual Pokémon Dratini, Harvard University researcher Katherine B. Howe had the same thought that had also dawned on many other health experts in the heat of the Pokémon Go craze a few months ago. Is the game capable of changing our lazy behaviors and getting us to exercise?

Many hot takes came out on the subject. But, along with four other researchers, Howe and Suharlim (a fellow Harvard researcher at the Chan School of Public Health) decided to actually find out the answer through data.

Their activity-tracking study, published on Tuesday in the journal BMJ,  analyzed the number of steps taken by 560 avid Pokémon Go players (at trainer level 5 or higher) compared to 622 non-players, age 18 to 35, over the course of 10 weeks. They found that Pokémon Go did, in fact, spur a significant increase in user activity for a short time following its June release. However, these habits hardly caught on. In the weeks following the game’s initial download, the players’ step counts returned back to normal.

The researchers had survey participants use the built-in accelerometer in their iPhone 6s to record the number of steps they took per day. In the first week after a user installed the game, their number of daily steps increased by 955 on average. Given that this translates to roughly 77 minutes of additional walking per day — half of the World Health Organizations recommendation — this change was not insignificant.

By the sixth week, however, the “Pokémon Go effect” had waned, putting users right back on pace with their former selves, and with those who had managed to avoid the global craze entirely.

“Here we really see that there’s interest in the game, and that it had significant impact on peoples’ activity, but that effect goes away over time,” Suharlim said. A level 23 trainer himself, his personal gameplay has decreased since the summer.

Because the researchers didn’t specifically track the precise habits of Pokémon Go players during the time period that the data was collected, it’s hard to state the exact reason that increased activity levels quickly waned. One likely answer was that the players had simply stopped playing the game, or were using it less, as time wore on.

Retention has been one area in which mobile gaming has always faced challenges, and Pokémon Go was no different. The initial hype of the game was followed by a swarm of negative reviews alleging glitches and crashes that indicate this may well have been the case.

In addition to increased user activity, the researchers note that evaluating the full health implications of Pokémon Go’s popularity would require a more holistic approach. Take mental health, an area in which some Pokémon Go players (and health professionals) claimed anecdotal improvement on a personal level. The lure of the augmented reality game prompted some people with depression and anxiety to get up, go outside and interact with others when they hadn’t felt this motivation in some time. But its marriage of the real and virtual world also seemed to be negative in some circumstances, sending other users to the hospital for distraction-related injuries.

Suharlim added that he feels there’s plenty of opportunity for public health experts to work with game developers in the future. “We need to be more creative in getting people to exercise more. It’s important to put these health benefits into the picture,” he said.