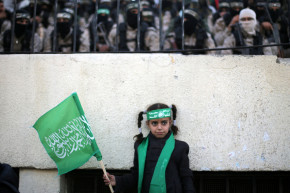 A Palestinian girl holds a Hamas flag at the group's anniversary celebration. — REUTERS
By Jacob Steinblatt with Mor Turgeman
Dec 11, 2016 at 11:20 AM ET

Palestinian militant group Hamas celebrated the 29th anniversary of its founding over the weekend in the Gaza Strip with a display of “the future of Hamas” — small children, many of whom toted semi-automatic rifles.

Tens of thousands of Hamas members and supporters reportedly took to the streets of Gaza on December 9, where the movement’s leadership slammed the rival Fatah movement, urging it to cease its security cooperation with Israel, and to renege on the “ominous” Oslo accords, signed between Israel and the Palestine Liberation Organization in 1993.

As part of the celebration, the group paraded its forces, which included uniformed and armed children. Supporters of Hamas took to social media to praise the armed children as “Hamas cubs.” The term is reminiscent of ISIS’s “cubs of the caliphate,” the child soldiers who are often shown in the terror group’s disturbing videos.

Translation: “Hamas cubs, they are the next soldiers of Gaza and the next liberation army, god willing”

Translation: Generation after generation Hamas is increasing its enthusiasm, dignity, and power.

Hamas was founded in 1987, shortly after the first intifada against Israel’s occupation of the West Bank and Gaza Strip. The group, designated by the United States, Canada, and EU as a terrorist organization, launched dozens of suicide bombings against Israel since its founding, and fought several wars against Israel in recent years. The group took control of the Gaza Strip in 2007 in a short military conflict with Fatah, a rival Palestinian political party.