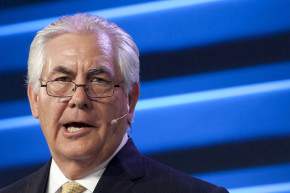 Secretary Of State Pick Once Got A Friendship Medal From Putin

Rex Tillerson was given Russia's Order of Friendship in 2013

Rex Tillerson, the president and chief executive of Exxon Mobil, is president-elect Donald Trump’s pick to become secretary of state. Tillerson is a controversial pick — he’s a lifelong employee of the oil giant with no government or diplomatic experience — and may be the American citizen with the closest ties to Russian President Vladimir Putin.

NBC News reported that the decision was likely on Saturday, and Trump’s transition team confirmed in Tuesday morning. Mitt Romney, who’d been under consideration for the position, posted on Facebook on Monday night that he was out of the running, thanking Trump.

Tillerson, who has been president of Exxon Mobil since 2004, has a very “close business relationship” with Russian President Vladimir Putin. In addition to the Texas-based oil giant’s numerous joint ventures with Rosneft, Russia’s largest state-owned oil company, Putin awarded Tillerson his country’s Order of Friendship decoration in 2013.

However, the relationship between the two oil firms wasn’t built to last: a lucrative deal struck by Exxon Mobil and Rosneft in 2011 that would’ve allowed Tillerson’s firm access to Russian resources in the Arctic was blocked by sanctions imposed by the U.S. and its allies over Russia’s invasion of Crimea.

Tillerson has spoken out against the sanctions. “We always encourage the people who are making those decisions to consider the very broad collateral damage of who they are really harming with sanctions,” he said at his company’s annual meeting in 2014, according to the Wall Street Journal.

With Tillerson joining the high ranks of Trump’s government, those sanctions might soon be history. And who knows — maybe he’ll even receive another decoration from the Russian government.