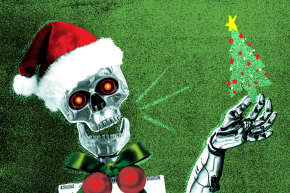 "The best Christmas present in the world is a blessing."

Christmas time is here, happiness and cheer…and, of course, lots and lots of Christmas music. It’s a musical phenomenon that’s changed so drastically over time from traditional liturgical hymns to bubblegum pop that the genre is now pretty much open to anything. Except, apparently, songs written by AI.

A team of researchers at the University of Toronto spurred a computer program to write what may well be the worst Christmas song of all time for a project they call “neural karaoke.” The computer, capable of recognizing images and picking out associated words through artificial intelligence, was able to achieve this feat after analyzing a photo of a Christmas tree.

What makes the song so spectacularly bad is that very little of it makes any sense. Some lyrics are mere sentence fragments like “a hundred and a half hours ago.” Others magnify the kind of creepiness the fact that they’re computer generated with cryptic messages like “I can hear the music coming from the hall,” and “I’ve always been there for the rest of our lives.”

The melody is also pretty awful, though decidedly Christmas-y in how upbeat it is. As with the lyrics, the computer program generated the tune from its learned database of over 100 hours of online music.

“We are used to thinking about AI for robotics and things like that,” Raquel Urtasun, one of the professors of machine learning and computer vision at the Toronto lab, told the Guardian. “The question now is what can AI do for us?”