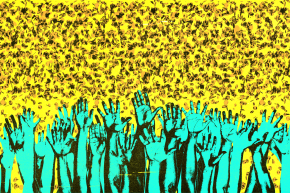 If an entire population received a flat payment, would that help defeat poverty? That’s exactly what the Economic Security Project is trying to find out.

The ESP — a group made up of venture capitalists, activists and educators — plans to invest $10 million in several Universal Basic Income projects by the end of 2018.

Universal Basic Income works by giving an entire population a specific amount of monthly free money, which would not only help fight extreme poverty, but in theory it would also help improve the economy, health, and education systems.

“We believe people need financial security, and cash might be the most effective and efficient way to provide it,” reads the group’s belief statement.

The concept of UBI has been championed by those in Silicon Valley in recent years. Some known figures that have invested in the project include Facebook co-founder Chris Hughes, Black Lives Matter co-founder Alicia Garza and Y Combinator President Sam Altman.

Some critics believe Silicon Valley types are interested in UBI because they see it as a mea culpa for in part creating the gap between classes and developing technology that puts people out of jobs.

It’s still unclear what the individual basic income projects will be, where they’ll take place, or what type of impact it’ll have in a nation like the U.S. However, some organizations working with ESP such as Y Combinator and GiveDirectly have already launched small pilot projects.

Y Combinator, a start-up incubator, has already funded a study on basic income earlier this year in Oakland, Calif. where it selected 100 families to give $1,000 to $2,000 a month to spend on literally anything, for between six months to a year.

GiveDirectly, a charity group, is also conducting research to find out how beneficial basic income can be in poor countries. The charity plans to launch a pilot with an investment of $30 million to provide regular cash payments to thousands of extremely poor families in East Africa.

Although these basic income projects are all taking place in different areas of the world, they all aim to figure out if providing free money will end poverty or encourage people to just stop working and focus on education, parenting or venture capitalism. Of course, giving away free money without any spending limitations also raises concerns of people simply using the money to buy alcohol and drugs instead of using it to better themselves.

ESP and the groups associated with it have yet to see results for their pilots, but GiveDirectly’s research has already proved that cash transfers are actually helping out poor communities. Some of the research from East Africa shows that poor areas are gaining more power, lowering their HIV rates and getting better schooling. That could potentially happen in the U.S. as well.