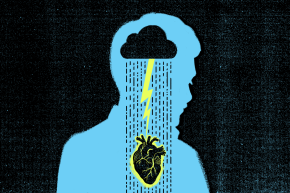 No One Likes A Pessimist, Even Your Own Heart
By Ed Cara

No One Likes A Pessimist, Even Your Own Heart

Pessimism linked to higher risk of heart disease death, but only in men

As if being a stodgy pessimist already isn’t bad enough for your social life, now it turns out that it may even be bad for your heart too.

In last month’s BMC Public Health, a team of Finnish researchers sifted through data from a well-preserved, long-running study of middle- and senior-aged Finns and came across an intuitive but rarely shown pattern: Those who considered themselves more pessimistic were more likely to die of heart disease years down the road, but only if they were men.

All in all, the team estimated that the most pessimistic men — defined as having scored in the top quarter percentile of a test that measured pessimism at the study’s start — were twice as likely to die of heart disease than the least pessimistic, after accounting for other known risk factors. Interestingly enough, though, the pessimism effect didn’t extend to women, and there wasn’t a similar effect for optimism; particularly hopeful people weren’t any more or less likely to die of heart woes than anyone else.

While not discounting the well-established physical circumstances that weaken our heart and circulation — smoking, not enough exercise, a poor diet, to name a few — lead author Dr. Mikko Pänkäläinen, a psychiatrist at the Paijat-Hame Central Hospital in Lahti, Finland, believes his team’s findings highlight the importance of our mental fortitude as a factor as well.

We should consider a person’s physical, psychological, and social foibles just as important as the next when evaluating their overall heart health, Pänkäläinen told Vocativ over email.

The study whose data they used involved three groups of Finns who were either in their 50s, 60s or 70s. After an initial battery of exams in 2002, the some 2,000 volunteers were followed for the next 11 years, and by study’s end, 121 had died from heart disease. The 10-question test that measured their outlook on life asked them to disagree or agree with statements like, “I hardly ever expect things to go my way,” and “In uncertain times, I usually expect the best.”

Earlier research by Pänkäläinen’s team, studying the same population, similarly found a gender-skewed connection between gloominess and the risk of developing heart disease in the first place. The gender difference may have to do with how men and women experience or try to relieve stress, the researchers theorize, and they cited research showing that men feel the physical effects of stress (a rise in blood pressure and heart rate) to a greater degree than women. According to another study, men might be more likely to drown their sorrows in a bottle of alcohol than women, and heavy drinking can also lead to high blood pressure.

The findings do clash with other research that found a connection between health and looking at the world through rose-colored glasses, but the authors speculate this might be because these earlier attempts didn’t look at optimism and pessimism separately. While someone may not feel too hopeful about accomplishing a goal, that may not necessarily make them pessimistic, they explain. A “true” pessimist, for instance, might be someone who thinks whatever goal they have in front of them is actually impossible no matter what they do, like starting a healthy diet. Optimism on the other hand may not really motivate you to be any healthier. In reality, though, most people are just a mix of both.

Pänkäläinen and his team next hope to study what in the body could explain how pessimism biologically influences the heart, such as certain types of inflammation. For the time being, he suggests that everyone keeps track of their health, defeatist or no.