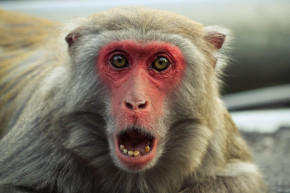 Monkeys May Have The Mouths To Talk, Just Not The Brains
By Alasdair Wilkins

Monkeys May Have The Mouths To Talk, Just Not The Brains

Nothing separates humans from other animals quite so cleanly as our ability to talk, but why is complex language seemingly the sole domain of humanity? For nearly 50 years, the accepted explanation has been that humans alone have the vocal command to make the sounds necessary for human speech. But a new study on macaques suggests these monkeys can indeed make pretty much all the sounds humans do, suggesting the real answer is somewhere in our brains.

In 1969, three researchers used a computer program and the cast of a rhesus monkey skull to figure out the vocal range of our primate cousins. They found the possible range of sounds a monkey could make were very limited, making it effectively impossible for it to replicate the variety of vowel sounds that are essential for language as humans speak it. That finding — and subsequent studies on chimpanzee skulls — established that non-human primates couldn’t talk because their mouths just didn’t have the right hardware for the task. Maybe their brains weren’t complex enough to handle spoken language, but it didn’t matter.

More The 10 Best/Worst Talking-Animal Films You Forgot About

A new study from researchers at Princeton and the University of Vienna may reverse that finding. The scientists were able to do one better than the original 1969 study by looking at the range of tongue, lip, and larynx movements made by actual, living macaques, which gives a fuller picture of their vocal abilities than just extrapolating from a cadaver. Using X-ray videos to see inside the monkeys’ mouths and chart every vocal position they revealed themselves capable of making, the researchers put together an inventory of sounds that can match that of humans.

If a monkey had the mental capacity to speak — and that’s a gigantic “if” that we’ll get back to — this study suggests it would be able to replicate most of human language, albeit with a heavy “accent” that would sound very different from any human way of speaking. The researchers found macaques would likely be particularly good at making the vowel sounds in words like “stop” and “laugh,” but they would probably struggle with the vowel in a word like “free.” That might matter a little bit, as that vowel sound requires one of the more extreme vocal configurations that is thought to be essential to human language, but the researchers say that alone isn’t enough to disqualify macaques’ vocal ability. From a hardware standpoint, they could probably talk.

But, of course, macaques and other non-human primates don’t talk, despite concerted efforts in the past to accomplish precisely that feat. As such, there must be another explanation for why spoken language eludes other primates, and that means we’re back to looking at the brain. Macaques must not have the neural circuitry that humans do, which might suggest the development of that mental capacity was a key part of our evolution into the species we are today.

It’s at least conceivable that this finding in macaques won’t hold up in other primates. But this suggests non-human primates really might be a massive brain upgrade away from being able to talk. Not that that’s about to happen — or might even be possible — but this does kind of mean all those “Planet of the Apes” movies aren’t completely ridiculous.