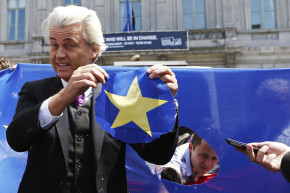 A Dutch politician on Friday was convicted of inciting discrimination and insulting an ethnic group with comments he made saying the Netherlands would be safer with less Moroccans.

Far-right leader Geert Wilders, who seized on a global wave of anti-immigrant sentiments popularized by Donald Trump on the campaign trail with his own slogan “Make The Netherlands Great Again,” posted a YouTube video to his Twitter account on Friday calling it a shameful move from the Netherland’s judicial system and attack on the freedom of speech.

“The Netherlands have become a sick country,” Wilders said in the four-minute video. “You can count on it: I will never be silent. And this conviction only makes me stronger.” Wilders added that he will appeal the conviction.

“The Netherlands is entitled to politicians who speak the truth and honestly address the problem with Moroccans,” he said. Wilders slammed the judges for being “completely out of touch.”

A judiciary panel found that Wilders had breached the law with his remarks at a March 19, 2014 campaign rally where he had asked supporters whether they wanted “fewer or more Moroccans in this city and in the Netherlands.”

“Fewer! Fewer!” the crowd chanted to which he responded, “Then we will arrange that.”

This initiated a backlash where more than 6,400 Dutch citizens filed complaints against Wilders at local police offices, according to the New York Times. His conviction did not come with any punishment, with the court saying the conviction was enough to serve as punishment.

Though it’s unclear whether his conviction will dent his party’s chances in next year’s election, it looks like Wilders is using this as momentum to gain support from his followers on the basis of anti-establishment discourse.

“You have restricted the freedom of speech of millions of Dutch, and hence convicted everyone,” he said. “But fortunately, truth and liberty are stronger than you. And so am I. I will never be silent. You will not be able to stop me.”

MY REACTION TO THE VERDICThttps://t.co/fnpoe9pHqd

This is not the first time Wilders was in court for anti-Islamic hate speech. In 2011, he was acquitted for comparing Islam to Nazism in the Dutch newspaper De Volkskrant, where he wrote that the Koran is “a fascist book” and to “Ban this wretched book like Mein Kampf is banned!”

Wilders, and other far-right leaders in Europe, have seen Trump’s win as a hopeful sign that fuels their anti-establishment discourse. In an op-ed for Brietbart, Wilders wrote, “America has just liberated itself from political correctness. The American people expressed their desire to remain a free and democratic people. Now it is time for Europe. We can and will do the same!”

Michiel Pestman, a lawyer representing Wilders’ claimants said that the conviction without punishment was uncommon, and therefore “a bit weird”, but that the principle of the ruling was more important.

“The judge has ruled for the first time in the Netherlands that there are limits to what even a politician can say,” Pestman said.