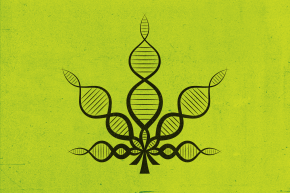 Mowgli Holmes remembers when most people chuckled or cracked jokes about junk food when he told them that he spent his days untangling the genetic makeup of marijuana strains. Now, they’re quick to ask about his business model or whether the biotech company he started three years ago plans to expand beyond Oregon.

“You can talk to the most uptight bankers on the west coast, and they just want to know the numbers,” said Holmes, who grew up on a hippie commune in the state and holds a Ph.D. in microbiology and immunology from Columbia University.

So here’s a few figures worth considering as you read on:

10,000: the number of years that humans have cultivated cannabis for their personal use.
$7.3 billion: the projected total sales of legal marijuana in the U.S. this year.
One:  the total number of scientists charting an evolutionary map of marijuana.

A former HIV researcher, Holmes co-founded the startup Phylos Bioscience in Portland in 2014. He has since been on a quest to sequence the DNA of every kind of weed in the world, an effort that would provide an unprecedented platform for research into the plant. Part gonzo science and part biotech venture, this molecular-level work could help shape the future of an industry that soon stands to make more money than the NFL and is already the driving force behind one of the fastest changing social issues of our lifetime. It is almost certain to transform America’s favorite illicit drug in unimaginable ways.

“When we understand this plant better we’re going to be able to help breeders make absolutely crazy, wild weed,” said Holmes, 44. “There’s going to be cannabis around that would be unthinkable today.”

Anyone who has stepped into a dispensary in a legal cannabis state lately could be forgiven for thinking the future of marijuana has already arrived. The days of good weed or bad weed, indica or sativa, are long gone. Instead would-be buyers confront a gauntlet of ganja strains whose heady names and promised highs require a well-trained budtender to parse. Legal marijuana will soon be available for recreational use in eight states, including Holmes’ Oregon, and medical use in 21 more. That’s created steady work for scientists to lab test weed for THC levels or pesticides, or assist with extracting potent cannabis concentrates.

Yet few have applied modern genomic sequencing — the process of determining the precise order and makeup of an organism’s DNA, which has accelerated breakthroughs in agriculture and medicine — to marijuana. “It’s still quite an undeveloped species from the perspective of genetics,” Jonathan Page, a Canadian botanist credited with publishing the first paper with a draft sequence of a single cannabis strain, told Vocativ. Part of the reason is because marijuana remains federally illegal, which continues to limit academic research. Nor does a full genetic map of the plant and its thousands of variations exist at this time.

Phylos and its 17 full-time employees have been making headway since the biotech startup opened its doors in southwest Portland. Holmes and his team have worked to cobble together a collection of cannabis strains that spans centuries, continents, and much of the U.S. market. He’s captured rare, and sometimes ancient, specimens from museums and herbariums in Thailand, Colombia, and a dozen other countries. He’s coaxed weed breeders and private collectors — who amass seeds, clones and antique pot accoutrement like others might comic books or baseball cards — into providing samples from their personal stash. Meanwhile, hundreds of heady strains with names like Golden Pineapple, Sweet Island Skunk, and Humboldt OG trickle into Phylos from growers and dispensaries across the U.S.

More The Bongfather: Using Science To Get The Perfect Hit

Holmes and his colleagues work to extract and sequence the DNA from every sample collected. Each sequence then gets loaded into a propriety database that organizes the DNA into clusters based on the genetic traits they share in relation with one another. These findings are visualized in what the company calls its Phylos Galaxy, an interactive 3-D map of the known cannabis world, which the company shares on its website. With more than 1,000 strains documented to date, it is the largest genomic database of marijuana in the world, experts say, though there still remain thousands uncatalogued.

The Phylos Galaxy seeks to map the known marijuana universe

“It’s a very important fist step in organizing the somewhat chaotic history of cannabis,” said Robert DeSalle, an evolutionary biologist at the American Museum of Natural History in New York, who sits on Phylos’ advisory board. “Unraveling that is just spectacularly interesting.”

But it’s more than just spectacular science. Holmes’ genetic work is already beginning to bring a new level of transparency to the marijuana market, which operated for decades out of basements or completely off the grid, and whose history may be more folklore than verified record. Even with one in four Americans about to live in states with legal recreational weed, there remains few measures by which to ensure that, say, the Sour Diesel you purchased this week is the same stuff you bought before, said Phylos co-founder and CEO Nishan Karassik. Nor have growers been able to scientifically confirm that the Panda Cookies or Gorilla Glue #4 that they claim to sell to dispensaries is the real deal.

To address this dilemma for consumers, growers, and sellers, Phylos, which has already raised roughly $2.5 million in venture capital, has started to market a genetics test to certify marijuana strains, which the company hopes can become a gold standard for the industry. Having greater consistency in the marketplace is likely to limit the number of recreational users gripped by paranoia or panic attacks caused by a disagreeable type of weed, Karassik said. For medical patients, the need to find a reliable strain to treat a chronic pain or illness is even more acute. As a bonus, each test adds another strain to Phylos’ expanding Galaxy.

“We have the ability to solve this issue of uncertainty,” said Karassik, an entrepreneur and Holmes’ childhood friend. “It’s really about building trust. The industry is more prone to benefit in the long term.”

Holmes imagines far greater things for the future of weed. With an unrivaled road map of cannabis DNA, he believes that Phylos will ultimately be able to work directly with growers and breeders to blaze pathways for hundreds of new strains to flourish — something that could help smaller businesses stay competitive in an ever-growing market. He envisions an industry that could look a lot like wine or craft beer, one populated by local purveyors working toward new creations and where the buzz is only one part of an experience that draws liberally on from the other senses.

“That’s kind of a good model for how cannabis can work,” said Holmes.

Still, there is slight trepidation among some of the very breeders and growers that Phylos wants to assist. A little transparency could go a long way in harming those businesses found to have produced strains — either knowingly or unknowingly — that differed from what they marketed. The talk of biotech, innovation, and genetics has also, with increasing frequency, conjured up the specter of large agricultural and pharmaceutical companies, whose deep pockets and armies of scientists and patent lawyers, many fear, could upend the marijuana business and crush the industry’s homegrown suppliers and sellers.

“There’s a lot of suppliers who say they have the genetics for exclusive strains, but they don’t,” said Gabe Fairorth, a grower with Sacred Seed in Denver, Colorado. “And obviously you have groups like Monsanto. It’s a very slippery slope.”

Holmes did not mince words on where he and Phylos stood on the issue. “We fucking hate Monsanto,” he said, referring to the agriculture and biotech behemoth mired in controversy. “If we can’t find a way to create a craft, artisanal industry, where lots of little people who really lavish love on interesting plants can be involved, and we just get this Anheuser-Busch industry, it’s going to suck.”

Though some fear that the incoming Trump administration — especially Alabama Senator Jeff Sessions, the president-elect’s choice for attorney general and an outspoken pot opponent — could cripple the legal-marijuana industry, Holmes is not among them. “Republicans are too committed to the idea of states rights,” he said. “There’s really no way any sitting president could send federal cops in to prosecute people obeying state laws. I think we kind of have a firewall.”

Phylos recently made all of its marijuana sequencing data open source by releasing it to a non-profit called the Open Cannabis Project, which is building an archival record of all existing cannabis strains. In doing so, Holmes and his colleagues hope to establish prior art for the strains it’s collected, a designation that places these varieties squarely in the public domain and protects them from potential patents.

“As plant scientists, that’s what we care about,” he said. “We want there to be crazy diversity. We want to preserve all the outrageous diversity that’s out there and we want people to make more.”