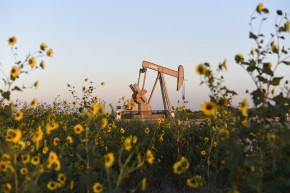 Top Environmental Pick Hates The EPA. What Could Go Wrong?
By Ethan Harfenist

Top Environmental Pick Hates The EPA. What Could Go Wrong?

On Wednesday, Donald Trump nominated a man who has spent years fighting against the country’s top environmental agency to lead that very agency. So, exactly how much damage could the head of the Environmental Protection Agency do if he happens to hate the EPA? Experts say a lot.

Scott Pruitt, the attorney general of Oklahoma, has a long tenure of friendliness to fossil fuel companies and unfriendliness toward environmental regulation. He has been a staunch opponent of President Barack Obama’s Clean Power Plan, the first piece federal legislation that limits carbon pollution from existing power plants and aims to cut pollution by 30 percent from 2005 levels. Writing in an editorial this May for the conservative magazine National Review, Pruitt lambasted Obama’s efforts to shutter coal-fired power plants and reduce emissions on the grounds that it would increase costs for American consumers. He also claimed in the same piece that the science of climate change is “far from settled.”

What’s more, Pruitt has gone so far as to wage legal battles in collaboration with members of the oil and gas industry in order to dismantle and challenge environmental regulations. A 2014 investigation by the New York Times that unearthed secret emails proved that Pruitt was working with the fossil fuel sector to get around regulations on fracking and air pollution. He has also, since 2002, received more than $318,000 in campaign contributions from the fossil fuel industry.

Pruitt’s record leaves little doubt about his beliefs when it comes how the government should protect the environment. The president-elect has been less decisive in his views on the environment — but his choice of Pruitt suggests his administration intends to take a staunchly pro-business, anti-regulation path. So, what will the world (or what little of it you can see through the clouds of smog blanketing the atmosphere) look like in four years? Some experts weighed in.

Dirty Water, Dirty Air
The EPA was created through an executive order on December 2, 1970, by Republican President Richard Nixon. According to its website, the agency’s central mission is “to protect human health and the environment,” and it does so by enforcing national environmental laws such as the Clean Air Act and the Clean Water Act.

Pruitt will likely undermine the EPA’s ability to maintain such standards. Cathleen Kelly, a senior fellow at the Center for American Progress, says Pruitt will likely “defang the EPA over the next four years,” posing threats to not only public health and clean air and water, but many of Obama’s environmental regulations.

“Pruitt helped to spearhead the legal battle against EPA’s Clean Power Plan, a rule aimed to protect public health by cutting carbon pollution from power plants. If he is confirmed as EPA chief, his track record leaves no doubt that he will weaken or delay the Clean Power Plan,” Kelly told Vocativ in an email. What this likely means, she added, is that Pruitt will dismantle Obama’s climate change initiatives in order to “prop up a dying coal industry so that it can artificially withstand market forces that prefer lower cost natural gas and renewable energy.”

Kelly also said that, “Pruitt could also weaken Obama administration rules to curb methane leaks from new and existing oil and gas facilities, and oil and gas produced on public lands. He could also undermine rules to limit emissions form heavy-duty trucks, and the Waters of the United States rule, which seeks to protect water sources that feed into the freshwater supply of a third of Americans.” Therefore, many Americans might find clean air and water in short supply in order for the fossil fuel industry to get theirs.

Pipelines Everywhere
There’s also fear that Pruitt, with Trump in charge, could also push back against the development of alternative energy sources in favor of fossil fuels and coal. Ashley Dawson, a professor of English at the CUNY Graduate Center and author of “Extinction: A Radical History,” believes that Pruitt could overturn decisions that have led to the cancellation projects such as the Keystone XL pipeline and the Dakota Access pipeline.

“We are in a period of boom for the fossil fuel industry in the United States, and that’s why all these pipelines are being built. There’s a glut of fossil fuels domestically, and so they want to build pipelines to export…to Europe and other markets where it can be more valuable,” Dawson told Vocativ Thursday. “Pruitt and other appointees are very much onboard with cutting back whatever progressive controls on the export of liquid natural gas that have been put in place, and of course, cutting any bans on pipelines that we’ve managed to get in place through massive mobilization.”

Although the Army Corps of Engineers decided to block the final steps necessary to complete the Dakota Access pipeline, a major victory for protesters, those demonstrating have vowed to stay put — in part, over fears that the incoming administration will reverse those fears.

The Death Of The Paris Climate Agreement
During his presidential campaign, Trump repeatedly vowed to remove the U.S. from the Paris Climate Agreement, an accord signed by nearly 200 countries that aims to tackle climate change. Since Pruitt has been going after Obama’s Clean Power Plan — the linchpin for the U.S.’s Paris commitments — it seems likely that international climate agreements are on his agenda to tackle.

“The role of Pruitt in the past suggests that even if the Trump administration doesn’t formally withdraw from the UN climate negotiations process — and it will probably take four years or so to withdraw from that process — they can nonetheless just gut the process by dismantling the Clean Power Plan,” Ashley said.

Environmental Catastrophes
For prominent environmental activist Bill McKibben, one needs to only look at Pruitt’s state of Oklahoma to see how he’s setting up the U.S. for catastrophe. “[Oklahoma] used to be a place essentially without earthquakes,” McKibben wrote in an op-ed for the New York Daily News published Wednesday. “But then the frackers started injecting their waste-water deep underground, and what do you know — pretty soon it was the most seismically active corner of America!”

But unfortunately, Pruitt’s powers to impact much more lands than Oklahoma potentially spells disaster for this country. “These guys are making a bet, with all of our futures, on the proposition that climate science is wrong and physics doesn’t work the way physicists think it does,” McKibben told Vocativ in an email Wednesday night. “I think it’s going to end badly.”