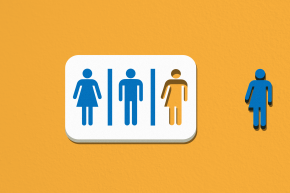 Most Trans Americans Are Afraid To Use Public Bathrooms

The largest ever study of transgender Americans has been published — and the results are pretty bleak. The survey of 27,700, conducted by the National Center for Transgender Equality, shows a community that struggles with equality in basic aspects of day-to-day living, including the now politicized issue of using the bathroom.

Per the study, the majority of transgender people feel some form of apprehension when it comes to using public restrooms, a simple practice most of their non-trans peers are likely to hardly give a second thought. Eight percent of survey respondents say they have contracted a urinary tract infection or kidney infection from having to suppress their need to use the restroom.

The study’s respondents account for 2 percent of the adult trans population in the United States, according to estimates.

Some1 said it was unhealthy to hold my pee for a 3hr car ride… LOL. I’m trans, I’ve held my pee for 10+hrs looking for a safe bathroom.

The survey was conducted prior to the passage of North Carolina’s House Bill 2 — known as the “bathroom bill” — which requires transgender people use the restroom that matches the gender they were assigned at birth. The bill caused an outcry, lost the state millions in business, and ultimately may have cost the governor who signed his seat. But the results show that it’s an issue that existed long before the North Carolina bill made headlines

Activists and LGBTQ allies in North Carolina have come up with some D.I.Y. solutions to help transgender Americans identify public restrooms where they can safely use their preferred bathroom since the passage of HB 2. Despite the election of a new, Democratic governor, it seems likely that the bill will remain in place, at least for now.

Of course, the trans community faces issues well beyond bathrooms. Unemployment, poverty, homelessness, HIV, police harassment, and health insurance issues were among other problems that disproportionately affect trans Americans, particularly those of color.

Reinforcing the findings of past research, the study also shows how transgender Americans are at heightened risk for suicide, facing psychological distress at almost eight times the rate of the general U.S. population.

If one were to apply that statistic across the entire transgender population living in America, as many as 98,000 transgender people may have attempted suicide last year.