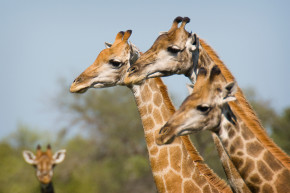 Damn It, Now Giraffes Are Being Hunted To Extinction As Well
By Alasdair Wilkins

Damn It, Now Giraffes Are Being Hunted To Extinction As Well

The giraffe population has dropped by about 40 percent since 1985

Giraffes aren’t endangered yet, but they are now pretty close to it. An international conservation group just listed the long-necked creatures as vulnerable, one category up from being endangered. And considering the giraffe population has dropped from nearly 150,000 a few decades ago to only 80,000 left in the wild today, they might be in even more trouble than that sounds.

Giraffes don’t have the same reputation as a poaching target as do other iconic animals of Africa like elephants or rhinoceroses. That’s because what makes the giraffe stand out — its long neck — doesn’t offer the same obvious prize as ivory tusks or a rhino horn. But an animal the size of a giraffe is still going to hold big appeal to poachers, who reportedly kill the creatures for food while on the hunt for more valuable game. The giraffe’s relative lack of value doesn’t protect if from hunting — it just makes its death incidental.

Poaching isn’t the only crisis that has begun indirectly harming giraffes. The HIV/AIDS pandemic and the poor availability of medications has created a market for folk remedies, and Tanzanian healers have claimed that the bone marrow and brain of a giraffe can treat or even cure the disease. This exacerbates the hunting for giraffes as a source of bushmeat for consumers willing to pay for it.

Other threats to giraffes are more subtle. The savanna environments that sustain giraffes throughout central Africa are shrinking because of human development, while climate change increases the frequency of droughts and wildfires. Disease may also be a growing problem for giraffes — which may too be tied in with rapid environmental change — but that is harder to verify.

Part of the problem is that giraffes have received relatively little media attention, with conservationists calling their population decrease a quiet, or even silent, extinction. That’s changed since the International Union for the Conservation of Nature placed giraffes on its list of threatened species earlier this week, attracting plenty of coverage. The threats facing giraffes are no longer a secret. Now it’s just a question of what to do about it.