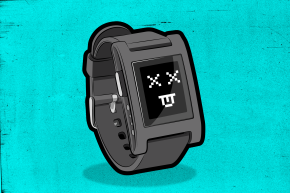 RIP To Pebble, Arguably The Best Smartwatch — You Will Be Missed
By Alejandro Alba

RIP To Pebble, Arguably The Best Smartwatch — You Will Be Missed

Time ran out on the four-year-old company

Another great underdog tech product has been crushed by corporate behemoths. The Pebble smartwatch is dead, and quite frankly, a part of my soul is too. Pebble and all of its key assets now belong to Fitbit, which means the hardware will be discontinued. That leaves loyal customers out in the cold — me included.

The company said in its last words, “it’s a bittersweet time, no doubt.” Really, there is nothing sweet about this. The Pebble was one of the first smartwatches in the market that got the concept right. Compared to other popular smartwatches available today, such as the Apple Watch and Android Wear devices, the Pebble was simple and efficient — and didn’t look like a mini computer strapped to your wrist.

The Pebble started as a humble Kickstarter campaign in 2012 that only asked for $100,000, but the product was so impressive that it reached its goal in just two hours. The campaign eventually raised more than $10 million and became, for a time, the “most funded Kickstarter ever.”

The company then broke another Kickstarter record in 2015 when it returned to sell the Pebble Time Round—a super light, thin and classic-looking smartwatch. The Time Round raised more than $20 million from more than 75,000 backers, which is the most funded campaign to date yet.

All of the company’s success on Kickstarter was not enough to stop it from shutting down, though.

Pebble struggled to compete with Apple and Android. Yet, the Pebble is a better smartwatch. It works across different platforms, excels as an activity tracker and its battery life outlasts all others. Sure, it has an e-ink screen, but it’s way more customizable than other devices.

I did not use Pebble since its inception, but I have used it for over a year and a half. It’s counted my steps, recorded multiple voice notes and even kept me entertained with 8-bit games. Oh, right, and it also tells me the time. However, what I like the most about the Pebble is that it’s not flashy — people often mistake it for an ordinary watch.

While existing watches will continue to work for now, Pebble founder Eric Migicovsky said that future functionality will be reduced. One-to-one support for all devices has already been suspended, and if your watch stops working, it won’t be covered by any warranty. Eventually, all the dedicated Pebble users will have to buy the mediocre, same-old Apple Watch or some other expensive device.

It’s a shame that Fitbit is killing all of Pebble’s hard work. If there’s a silver lining here, it’s that Pebble’s talent will still have jobs as they join Fitbit — congrats to them.