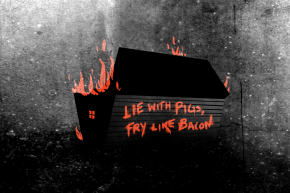 Anti-police graffiti was found when a firefighter's house was burned down. Now police believe he was the one who put it there.

The home of a firefighter who prominently displayed a Blue Lives Matter flag in his front yard burned down in what investigators believed was an arson. When a message that said “lie with pigs, fry like bacon” was found at the scene, suspicions immediately fell on Black Lives Matter activists or sympathizers. Those suspicions, it appears, could not have been more wrong.

The home of Jason Stokes, a firefighter in Endicott, New York, was set ablaze in August and the anti-police graffiti touched off a wave of articles from right–wing and pro-police websites accusing Black Lives Matter of targeting a vocal supporter of the police. Last week, however, Stokes was charged with second-degree arson (he has pleaded not guilty). It is believed that he wrote the anti-police message — to try to divert suspicion from himself.

In a press conference, the district attorney said that numerous gas cans were found throughout the home that he believes were meant to be booby traps for the firefighters. Stokes’ wife and children were able to escape the fire, which was set in the middle of the night, unhurt.

Blue Lives Matter which, Raw Story pointed out, was all too happy to run with the narrative that Stokes was the victim of “terrorists who are attacking law enforcement” did not respond when asked for comment on when it would be updating that post to reflect the latest news.

On the day that Stokes pleaded not guilty, Blue Lives Matter did write about someone who was accused of trying to frame a political movement. But it wasn’t Stokes. It was William Tucker, who was charged with tagging a Philadelphia street with graffiti that had racist, antisemitic, and pro-Trump messages in an apparent attempt to make it look like it was the work of Trump supporters. Blue Lives Matter used this one incident to suggest that much of the hateful vandalism that has popped up in the country following Trump’s election is actually the work of “anti-Trump social justice warriors.”