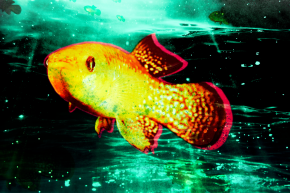 Human Pollution Is Causing This Fish Species To Rapidly Evolve

The Atlantic killifish ought to be dead. An inhabitant of some of the East Coast’s most polluted waterways, this species survives in waters that are several thousands of times more toxic than other fish could cope with. The secret of the killifish’s success? According to new research, the fish is able to undergo what scientists call “flash evolution,” adapting at speeds that few other species could match.

Killifish populations are found in New York Harbor, the Hampton Roads region of the Chesapeake Bay, and Long Island Sound, all of which are prime dumping grounds for human pollutants. If killifish can find ways to adapt and survive in these inhospitable waters, could that offer some good news for other species threatened by human environmental damage?

Unfortunately, what works for killifish is unlikely to work for nearly any other species. Researchers at the University of California, Davis examined the genomes of hundreds of killifish and found the populations in these toxic waters had all undergone pretty much the same evolution to a particular biological pathway. This adaptation allowed them to fend off the pollutants that would otherwise lead to deformed embryos and early deaths.

More Amphetamines Are Making Their Ways Into Urban Streams

That all the killifish populations seized upon the same basic solution suggests that it was one of a very limited set of survival options for them. The killifish likely had the particular genes necessary to survive in these waters all along, as it’s unlikely all four populations would have undergone the same random mutation.

The killifish survive because of an ultra-rapid form of natural selection. Under normal circumstances, there’s no particular benefit to the gene that helps them survive in polluted waters. But when the fish do find themselves in a toxic environment, those fish that, by random chance, are born with the helpful gene have a massive survival advantage, and in a few generations, they have passed that critical gene through the entire population. That same process happens in any other species, but what sets the killifish apart is that its genetic diversity is so high that this otherwise rare gene is found frequently enough for it to take hold before the population dies out.

Unfortunately, the researchers found that the genetic diversity of the killifish is much higher than in a typical vertebrate. A killifish can’t match the adaptability of a plant or a pathogen, but it’s at the very high end of what vertebrate species can reasonably hope for. It’s also got big enough population sizes for that genetic diversity to be helpful quickly enough to save the species. If the killifish populations were much smaller, all the genetic diversity in the world wouldn’t have helped if the required genes hadn’t had a chance to propagate quickly enough.

As such, the survival of the killifish is a remarkable achievement for the species, but it’s also an outlier, a quirk of evolutionary biology. The killifish’s success in the face of human pollution and climate-related damage serves more as a reminder that most animals won’t have just the right combination of traits necessary to survive similar hardships. Unless we want a world that’s just us and the killifish, a little extra environmental care wouldn’t be a bad idea.