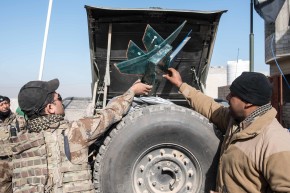 Drones are a crucial part of ISIS' lethal strategy in the fight for Mosul
By Campbell MacDiarmid
Dec 12, 2016 at 9:39 AM ET

MOSUL, Iraq – A convoy of black Humvees crawls along a dirt track on the eastern outskirts of Mosul on an overcast morning in late November. The vehicles stop at an Iraqi Security Forces (ISF) command post and soldiers begin unloading a pile of unmanned aerial vehicles from the back of one of the armored vehicles. The drones range from off-the-shelf, consumer-grade quadcopters to homemade, fixed-wing craft assembled from duct tape and the kind of corrugated plastic ordinarily used for signs.

“These are daesh drones,” a soldier explains, “and we captured them.”

Since the start of November, ISF have been fighting to recapture Mosul from the Islamic State, known locally by its Arabic acronym daesh. They are discovering though that with two-and-a-half years to prepare their defenses, ISIS militants are well entrenched in Iraq’s second-largest city.

Drones have emerged recently as a crucial and lethal part of the group’s defensive strategy. Beyond their tactical value, analysts also see drones as a further example of the group’s adaptability, suggesting that further new developments may await the Iraqi armed forces as they penetrate deeper into the heart of the so-called caliphate.

The captured drones are carried to the roof of the two-story concrete house, where officers are busy talking into radios.

“These are just the drones we got today,” says Lt. Gen. Abdul Wahab al-Saadi.

The mustachioed officer is the deputy commander of the elite counter-terrorism special forces carrying out the bulk of the fighting in Mosul. He stops talking into his radio to explain that the ISIS drones are important both for reconnaissance and for aerial shots in the terror group’s propaganda videos. “They use them to film our troops, and now they also use them for directing their suicide bombers.”

It’s a lethal development. Since launching the current military operation on October 17, suicide bombings have been the ISF’s most deadly threat. Iraqi authorities claim ISIS have dispatched over 600, ISIS propaganda puts the number at less than that. Either way, the figure is unprecedented.

In the early stages of the Mosul campaign, the fighting took place on the relatively open Nineveh Plains which provided open lines of sight for suicide bombers. As the fighting moved to a close quarters urban combat zone however, it became more difficult for suicide bombers – peering through the narrow viewing slit in their vehicle’s improvised armor – to navigate to their targets. This is where the drones have come into play.

A recent ISIS propaganda video shows how relaying directions via a drone can further increase the effectiveness of SVBIEDs — suicide vehicle-borne improvised explosive devices. In the clip — itself filmed from a drone — a suicide vehicle is seen driving towards a Humvee. At the last moment though, it drives around the vehicle to detonate closer to a larger grouping of military vehicles.

The video shows that the suicide bomber was in close communication with the drone pilot, says Charlie Winter, an ISIS expert at the London-based International Centre for the Study of Radicalisation. Studying ISIS propaganda videos like this has led Winter to conclude that drones are being used to guide the bombers as well as film their results.

“I think the propaganda role is absolutely there, but I think tactically, drones do play quite a big role also,” he said.

Back at the command post, an enormous explosion rocks the neighborhood. It’s another suicide bomber — the fourth for the day — detonating nearly two miles to the west. An enormous dust cloud rises from the scene and the officers on the roof rush to radio in its coordinates. Two bearded French special forces soldiers remain hunched over their rugged laptops, while voices speaking with American, British and Australian accents communicate with Iraqi officers over the radio. Somewhere, western coalition troops are monitoring the situation from drones of their own, Lt. Gen. Saadi remarked.

That particular suicide bomb failed to cause any casualties, Brigadier General Haider Fadel Azurki reported afterwards. He insisted that tactics like these will not be enough to stop his men. “Our forces are experienced and morale is high,” he said. “We are advancing according to our plan.”

A pair of large-scale maps hanging on a wall behind him though show just how slow their advance has been. After more than a month of fighting, Iraqi forces have barely penetrated the eastern neighborhoods and are still far from the Tigris River which divides the city.

Institute for the Study of War

A visit to a nearby casualty collection point shows the toll the fighting has taken so far. Set up in an abandoned home, the clinic consists of little more than cots where the wounded are stabilized before being raced to the nearest hospital — an hour’s drive away in the city of Erbil in Kurdistan.

Standing outside, Lieutenant Zaid watched as people were brought in. “Just suicide bombs and snipers,” the 22-year-old said in English. “No real fighting.”

Like many Iraqi soldiers, he gave only his first name but said he was from Babil, and used to study law in Baghdad before joining the special forces two years ago.

In the two weeks he’s fought in Mosul, Zeid says he’s experienced three suicide bombers at close range. The nearest blew himself up a mere 30 yards away, leaving Zeid’s ears ringing for days. There’s a hint of frustration in his voice as he explains how they are unable to engage the enemy in conventional battle.

A black Humvee tears up in a cloud of dust and disgorges a patient. A soldier, shot through the chest by an ISIS sniper. He is already dead.

Exactly how many soldiers have been killed in the campaign is a sensitive issue. The UN mission to Iraq reported last week that 1,959 members of the ISF had been killed in November across the country. The Joint Operations Command of the Iraqi military reacted angrily, denouncing the figures as “much exaggerated.” UNAMI later said it would stop issuing military casualty estimates, saying “military figures were largely unverified,” because the Iraqi military doesn’t release its own casualty figures.

“UNAMI has just touched an extremely sensitive point,” explained Michael Knights, a Boston-based Iraqi military expert at The Washington Institute. “The Iraqi government is struggling to keep together a narrative for why thousands of Shiites from the south should be wounded and killed fighting to liberate Mosul, a Sunni city which was seen to welcome ISIS.”

Heavy casualties will be hard for the ISF to sustain politically, something that ISIS is well aware of. Knights says their strategy is carefully calibrated for maximum impact.

“It may be that this kind of fighting” — relying on snipers, suicide bombers and drones — “is quite economical for ISIS,” he said. “It doesn’t actually kill them in large numbers. This warfare is more grueling on us than it is on ISIS. They can sustain this kind of fighting better than we can.”

The ability to adapt and adjust strategy is one of ISIS’ most successful hallmarks. Says Winter: “When it strikes upon an innovation or tactic that works — whether it’s on or off the battlefield — it’s very ready to spread that around and replicate it … if this is not the most important thing about ISIS then it’s very high up there as to why its been such a resilient insurgency.”

Another organization watching the ISIS drone program with interest is Conflict Armament Research, a non-governmental organization that documents weapon supply chains in war zones. Damien Spleeters, a field investigator for the group, believed he has evidence ISIS may be trying to develop weaponized drones.

Visiting Ramadi after it was recaptured, Spleeters discovered an ISIS drone workshop. In it were several large partially-completed drones built from scratch. He found disassembled components from a shoulder-fired surface-to-air missile, which let him to conclude that ISIS were planning to attach the warhead to a drone.

Looking at photos of the drones captured in Mosul, Spleeters notes that the fact they are not just relying on off-the-shelf products. “Why do you go to the trouble of making your own stuff?” he asked. “Because the commercial off-the-shelf stuff might not be sufficient for your needs.”

In October, two Kurdish troops were killed and two French paratroopers injured by an exploding ISIS drone. In this case the drone had apparently crashed and the Kurdish troops had taken it to their base. The booby-trapped device exploded when they tried to disassemble it. What Spleeters anticipates could be developed next, is ISIS drones capable of actively targeting ISF command posts. “It’s very difficult though,” he said. “It’s really a lot of engineering stuff.”

For now though the ISF believe they have the ISIS drone strategy beat. “We have fixed this problem,” says Lt. Gen. Saadi. “Any ISIS drones we see, we just shoot them down.”