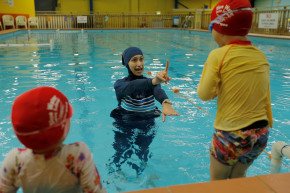 The court claimed that there is no evidence the classes breach moral code, despite appeals

On Wednesday, Germany’s highest court ruled that a Muslim schoolgirl must attend mixed-gender swimming lessons. This decision came after an appeal from an eleven-year-old student and her family who said that even wearing a so-called ‘burkini,’ or full-length swimsuit, revealed the shape of her body and therefore went against Islamic dress code.

The girl’s parents had appealed for her to be exempt from swim classes because the attire violated their understanding of their Muslim faith. The Constitutional Court in Karlsruhe rejected their appeal on the basis of the lower court’s ruling that “no binding rules in Islam” determine appropriate attire.

“The plaintiff has not made sufficiently clear that … taking part in co-educational swimming lessons with a burkini breaches Muslim rules on clothing,” said the Federal Administrative Court in Leipzig, Germany, who rejected the appeal, according to NBC News.

This ruling comes at a time of heated debate over Islam in Germany — sparked largely by right-wing leaders’ concern over an influx of migrants from Muslim nations. In the last few years, more than a million refugees and asylum seekers have entered the country fleeing from war, the majority from Syria.

On Tuesday, Chancellor Angela Merkel called for a ban on the full-face veil, claiming that they are not in tune with German culture. It is possible that Wednesday’s ruling might give Merkel more leverage the for passing laws in the future.