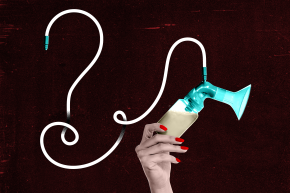 Researchers warn that breast milk fed directly by breast, rather than by bottle, is best

So often the heated public debate over breastfeeding, and the mommy shaming that accompanies it, is boiled down to breastmilk versus formula. For years, activists have campaigned around the scientific evidence of breast milk’s superior health benefits. But researchers behind a new study are warning that moms don’t understand the benefits of feeding babies breast milk directly from their breast and are increasingly turning to feeding their child breast milk in a bottle.

Over a five year period, the researchers surveyed more than 2,000 new moms in Hong Kong about their feeding practices. They found that in just that short time span, new moms began to increasingly rely on the bottle. Between 2006 and 2007, the rate of feeding exclusively expressed (by hand or pump) breast milk in the first 6 months postpartum was between 5 and 8 percent. (Expressed breast milk is typically fed to a baby with a bottle.) Between 2011 and 2012, it jumped dramatically to between 18 and 20 percent.

“New mothers may believe there is no difference between expressed breast-milk feeding and direct feeding at the breast,” said study author Marie Tarrant of the University of British Columbia in a press release. “Although expressed breast-milk feeding provides greater benefits than infant formula, bottle-feeding may increase the risk of respiratory issues, asthma, rapid weight gain and oral diseases.” The research backs her up.

This might just sound like another instance of mommy shaming — first we criticized them for relying on formula, now we’re criticizing them for feeding their babies breast milk the wrong way? But Tarrant is focused on the policies, or lack thereof, that make it difficult for women to exclusively feed their babies by breast — like, for example, workplaces that are unfriendly to new moms.

Tarrant suspects that another factor is all the challenges — from sore nipples to a baby’s difficulty latching on — that can derail breastfeeding if a woman doesn’t have proper support. “Once the baby starts taking the bottle it is even harder to get them back to direct breastfeeding so they continue to use expressed breast milk,” said Tarrant in an email to Vocativ. She believes that better access to professional lactation consultants, especially in the hours immediately after birth, could prevent a switch over to the bottle.

But none of this is to suggest against feeding a baby breast milk by bottle, she says, it’s just not the ideal scenario. “No one is saying that the feeding of expressed breast milk shouldn’t be recommended,” she said. “It’s just that direct breastfeeding is preferable, where possible.”