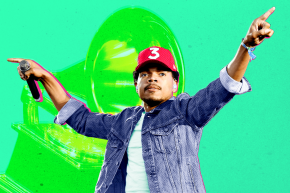 The Chicago-based hip-hop artist was nominated for seven Grammy awards including “Best New Artist” and “Best Rap Album” for his Apple Music exclusive album “Coloring Book,” which was streamed 57.3 million times during its first week.

However, Chance was not the only artist who released his music exclusively on a streaming platform and get nominated for several Grammys. Other artists with the most 2017 nominations who’ve released music exclusively on Apple Music or Tidal include Beyoncé, Rihanna, Drake and Kanye West, making up most of the top nods. Eventually, most of their albums made their way to other services like Spotify, but Beyonce — who has nine nominations  — has kept “Lemonade” exclusively streaming on her husband’s Tidal platform.

The only artist from this year’s Grammy nominations that did not release streaming-platform exclusives, but still got a decent amount of nominations, was Adele. The British singer released her album “25” as a physical copy only and broke several records by selling more than 3.8 million copies within the first week. It wasn’t until seven months later that her songs were available on Spotify, Apple Music and other platforms—where she continued to break more records in music.

Last year, Taylor Swift similarly refused to stream her music. Eventually, after a long fight with Apple over how it payed artists, she made a deal to exclusively stream her latest album “1989” on Apple Music. Swift’s album was also very popular and landed her seven nominations at the 58th Grammy Awards.

Chance the Rapper’s nominations, along with the other streaming artists, comes as no surprise, though. The Recording Academy announced in January that it was going to start allowing “previously ineligible streaming-only” music to be nominated for next years 59th Grammy Awards, which will take place on February 12, 2017. Eligible music must be streamed on platforms such as Apple Music and Spotify, but other web sites like Soundcloud are not accepted.

Streaming sites have increased in popularity over the past year, so it makes sense for them to have such on influence on music awards. Spotify has more than 40 million subscribers as of this summer and Apple Music has more than 17 million. In the future, all nominations could potentially be for artists that exclusively release music online.