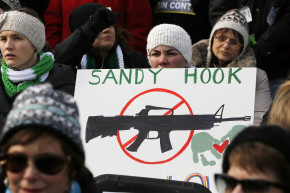 Long before a gunman marched into a Washington D.C. pizza restaurant on Sunday to “investigate” the goofball “Pizzagate” conspiracy theory, another fake news story was also causing real world problems — and this week a woman behind that particular conspiracist fantasy was arrested by federal authorities.

On Monday, a Florida woman — who buys into the Alex Jones-inspired myth that the 2012 massacre at Sandy Hook Elementary School was a hoax — was arrested after allegedly threatening the parents of one of the victims of the deadly mass shooting.

According to court records obtained by Vocativ, Lucy Richards, 57, sent several threatening messages to a man whose son was killed when Adam Lanza stormed into Sandy Hook Elementary School on December 14, 2012, armed with a Bushmaster XM15-E2S assault rifle and murdered 26 people, including 20 children under the age of seven. The parent who received the threats was Lenny Pozner, a vocal critic of the Sandy Hook “truthers” and a frequent target of their online vitriol.

“You gonna die,” one message sent in January read, according to the indictment. “Death is coming to you real soon.”

The Sandy Hook hoax is a baseless conspiracy theory propagated by crackpots like far-right-wing radio host Alex Jones and by renowned racists like David Duke who, per usual, blames the Jews for staging the supposed hoax that took the lives of 27 people.

“Lead bul­lets are not mur­der­ers. The real mur­der­ers are not the bul­lets, but the Bul­lies of the Zio Media,” Duke posted on his website following the shooting, using a term for Zionist. “Guns did not cre­ate the hor­ror in that lit­tle school in Sandy Hook, Con­necti­cut. The Zio mas­ters of the media did. They have devoured the real Amer­ica. The mas­ters of the media con­tinue to take us down the path of human depravity.”

Richards isn’t the first Sandy Hook truther to face criminal charges for harassing the families of the victims. In November of 2015, 32-year-old Matthew Mills confronted the sister of Victoria Soto, a Sandy Hook teacher killed trying to protect her students from Lanza, and shoved a photo in her face while ranting about how the shooting was a hoax, and that Victoria Soto never actually existed. In April, he accepted a plea deal that landed him on probation for two years.

After years of relentless harassment from Sandy Hook truthers, Pozner organized HONR, a resource center for families of victims who are the targets of harassment.

“There was a segment of the population that wanted to have these things debunked,” Pozner told New York Magazine in September. “All they know is what they’re seeing online, the buzz of all of this dis­information, and someone needed to provide the service of offering accurate information should they want it.”