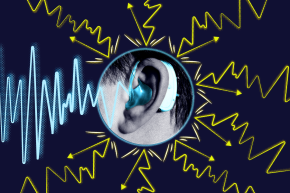 One Of The Biggest Problems With Hearing Aids May Be Fixed

The annoying feeling of being unable to hear your friend standing right next to you in a crowded bar is one that most people only deal with occasionally and can fix by simply leaving. But for some hearingimpaired people who rely on hearing aids, that’s what every conversation with multiple speakers can feel like. While the human ear and brain, working in tandem, make it possible for us to distinguish voices from each other or, say, a passing car, hearing aids have traditionally fallen flat in this regard. But now new computational processing methods show hope in fixing this issue, deemed the “cocktail party problem.”

Researchers at Ohio State University say they’ve been able to improve the ability of test subjects to understand specific words obscured by background noise by up to 90 percent.

The speech isolation methods detailed by computer science and engineering professor DiLiang Wang in a post on IEEE Spectrum are controlled by a machine-learning program that uses a neural network roughly modeled on the human brain to process and distinguish sound. In order to train the program how to better segregate a speaker from cacophony, the researchers have purchased a sound database with 10,000 different noises intended for filmmakers creating special effects.

To test the software, the researchers had 12 hearingimpaired people and 12 people without hearing impairments evaluate how easy it was to hear simple sentences like “It’s getting cold in here” and “They ate lemon pie.” They played them the sentences recorded amidst background noise both before and after the recordings were run through the software. For those with hearing impairments, comprehension went from 10 percent in the original recording to 84 percent after processing.

While this technology is still a ways off from being embedded directly into hearing aids, such improvements show great promise in making hearing aids more widely used. In 2013, one researcher found that 80 percent of adults who would benefit from a hearing aid choose not to wear them, and that over a quarter of those who actually own one already choose not to use them. Add these new innovations to improve hearing aid tech to the up-and-coming market for “fashionable” hearing aids, and hearing aids might just be the new must-have device.