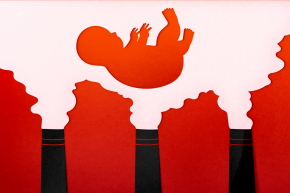 Slowing population growth would help both the climate and economy

Tackling climate change could come down to a simple math problem, really. Every human is responsible for around 1,000 tons of carbon emissions over a lifetime. So if fewer humans are born, that’s a whole lot of earth-ruining emissions that never occur. Reducing population growth is one of the few ways to take on climate change that doesn’t involve making an immediate economic sacrifice, as a new paper points out — but that’s not likely to make the idea any less controversial. No one likes idea of the government regulating how many babies they can have.

A pair of Brown University economists looked at what would happen to the economy and climate if a country’s overall fertility decreased. The trick here is that altering population growth affects the entire structure of society. People usually have more time to work when they have fewer children and can put more of their resources into each child. Each person tends to make more money, which leads to overall economic growth, they write in a paper posted on the National Bureau of Economic Research.

Fewer people also means decreased carbon emissions. If Nigeria, for example, achieved the United Nations’ low-end fertility projection, it could cut its emissions by 35 percent by 2100 while increasing per capita income by 15 percent. As the researchers point out, this is the rare instance of a possible win-win in long-term climate policy, particularly for developing nations that shouldn’t be expected to sacrifice their own economic progress to undo damage done by the U.S., Europe and other wealthier nations.

The delicate question, of course, is just how a country achieves such a decrease in population growth. Any such discussion risks treading into dark territory, but there is a relatively un-dystopian way to reduce the number of babies: birth control, and plenty of it.

True, it’s difficult to put forward an idea like this without sounding like it’s rich countries, whose fertility rates are already so low that population control can’t make as much of a difference, are imparting social engineering on poorer nations. The potential difference here is potentially the fact that the economic benefits are front and center alongside the environmental ones.

Nigeria, for instance, wouldn’t just be helping wealthy carbon emitters if it took steps to slow population growth. It would also become a significantly richer country in the long run. The authors do point out that population control alone isn’t enough to contain carbon emissions, especially when wealthy, low-birthrate countries are already responsible for most of the world’s emissions. Transitioning to a renewable energy-based economy is still crucial. Having fewer children would only be a start in the fight to contain global warming, but it’s likely one of the more pleasant options out there.