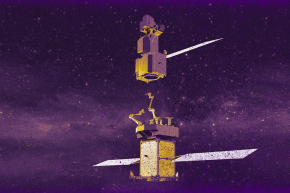 The U.S. Will Launch A Robot Mechanic Into Space
By Jennings Brown

The U.S. Will Launch A Robot Mechanic Into Space

Our global communications network depends on hundreds of satellites orbiting the earth. But whenever those space crafts run out of fuel or break down, they become worthless and add to the ever-thickening field of space debris that destroys satellites. Now, U.S. government agencies NASA and DARPA are tackling this growing problem by making it easier for to launch and keep satellites in space. And, of course, they’re doing that with robots.

On December 5, NASA announced it had granted $127 million to satellite contractor SSL to develop a robotic spacecraft that can grab and service satellites in orbit around earth. The robot mechanic, Restore-L, should be able to fix virtually all satellites currently in orbit, even if the satellites weren’t designed to be repaired. NASA expects to launch the first Restore-L in 2020, so it can tune-up and refuel a government-operated satellite in low-Earth orbit — most likely Landsat 7, which is collecting images of Earth for the U.S. Geological Survey and has been orbiting the planet for 17 years.

“Restore-L effectively breaks the paradigm of one-and-done spacecraft” said Frank Cepollina, associate director of the Satellite Servicing Capabilities Office, in a statement last June. “It introduces new ways to robotically manage, upgrade, and prolong the lifespans of our costly orbiting national assets. By doing so, Restore-L opens up expanded options for more resilient, efficient, and cost-effective operations in space.”

This week’s Restore-L announcement came just a week after DARPA announced the creation of the Consortium For Execution and Rendezvous and Servicing Operations (CONFERS), a forum of space experts from the government and private sector who will create a set of technical and safety standards for robotic repair space crafts. “We’re inviting the space community to join us in creating a permanent, self-sustaining ‘one-stop shop’ where industry can collaborate and engage with the U.S. Government about on-orbit servicing,” said DARPA program manager Todd Master, in a statement.

DARPA has also been investing in its own technology to help repair satellites. In July, the agency awarded $20.7 million to SSL to build robotic space arms that could service on-orbit spacecrafts. And in a recent speech at the Defense One Summit, DARPA Director Arati Prabhakar said the agency is taking “big bets” on space initiatives like the Phoenix program, which is also focused on building robots that can repair satellites in orbit as well as the development of satlets — modules that connect to form a full satellite, making the full craft easier to repair.

For anyone who wants to weigh in on consortium that will decide the guidelines for the robot mechanics in space, DARPA is hosting a proposers day on December 16 in Arlington, Virginia.