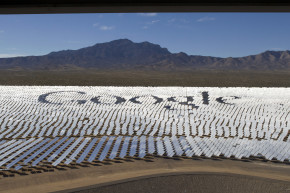 Your Google Searches Will Be Nearly Carbon Neutral Next Year

The tech giant announced Monday that both its offices and data centers that power the operations of its internet products will run on renewable power by some time next year. Google is reaching its goal largely through contracts with large-scale solar and wind energy producers around the world. These purchases are calculated to offset the electricity it consumes from local power grids (which utilize fossil fuels).

Renewable energy costs have come down 60 percent for wind and 80 percent for solar over the last six years, the company says, which makes it easier for Google to invest more money globally and secure energy prices that are stable in the long-term. To date, it has 20 renewable projects—about two-thirds invested in the U.S. And the more invested in solar and wind sources, the cheaper these energy sources will get, the company notes. Along with the announcement, Google also will release an environmental report that outlines the company’s carbon footprint and a web site that monitors its efforts to reduce energy.

Google claims that it’s the biggest tech company to run on renewable energy, but it’s far from the only one. Apple, for example, also a big purchaser of solar energy. This summer, the iPhone maker formed a subsidiary called Apple Energy LLC that sells surplus solar power generated by its own farms in Cupertino and Nevada.

Amazon and Facebook have also jumped on the trend by making deals with wind and solar energy producers. Microsoft also says it’s 100% carbon neutral, but some of that comes from less direct carbon offset projects, like tree planting, that compensate for the company’s fossil fuel consumption, according to The New York Times.

Now every time you use a Google web service, you can know that the carbon footprint behind it is minimal. Google searchers, however, won’t be 100% carbon neutral because, at minimum, your computer is still using electricity that very likely is not carbon-free.