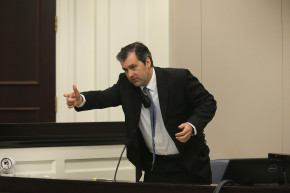 One of the most pro-cop communities out there has criticized Michael Slager, who was filmed shooting Walter Scott in the back last summer

A South Carolina court failed to convict Michael Slager, the former South Carolina police officer who was filmed shooting Walter Scott in back as Scott ran away, after the jury failed to reach an agreement on Monday. That shocking outcome — in the face of evidence that seems so airtight — didn’t sit well, even with members of one of the most vehemently pro-cop groups online.

Blue Lives Matter, a group that sprung up in response to the Black Lives Matters movement with the aim of defending law enforcement officers it believe are unfairly vilified, published a story Tuesday expressing its doubts of the officer’s innocence.

The creators of Blue Lives Matter, along with their 1.3 million followers, tend to blame President Obama, Black Lives Matter, the media, and liberals for what they believe is a growing anti-police movement — often suggesting that attacks on police officers are the fault of that sentiment. High profile cases of alleged police brutality, however, are nearly always blamed on the victims. The Baltimore officers charged in Freddie Gray’s death, for instance, have been called “heroes,” while the mothers of unarmed black men who were killed by police officers are dubbed the “my baby didn’t do nuffin’ crew.”

That’s why it’s exceptional that both the group and many commenters on its Facebook page have come out against Slager, who was filmed in 2015 shooting Walter Scott, an African American man, in the back as he ran away.

In an article published Monday, “Cowgirl” (the people behind Blue Lives Matter post anonymously), wrote that “publicly released information doesn’t clarify why Slager believed that Scott was a danger to anyone’s life as he ran away,” that there were “discrepancies” between Slager’s story of what happened and what could be seen on the video, and, most damningly, that “we find [Slager’s] justification lacking.”

Facebook commenters also came out against the officer, saying things like, “he did not need to shoot that man in the back, as many times as he did, while he was running away;” “I certainly support the police but this needs to be in jail;” and “It’s rare that I don’t side with the police but this is one of those times.”

Others worried that if Slager isn’t held accountable, it could perpetuate what they feel is a “false narrative” spread by Black Lives Matter: that police officers intentionally shoot unarmed black people because they are racist, and that those officers’ actions are approved and even rewarded by a system that refuses to penalize them. This, many fear, could put good officers’ lives in danger.

“This travesty just put a target on the good officers’ backs. Unbelievable,” wrote a commenter who had a Blue Lives Matter logo for his profile picture.

“I’m always for the cop but not in a case like this one,” said another. “If he walks the outrage will start all over again. And the good cops will be the ones in harms way.”

Not all commenters were uniformly in favor of convicting Slager; some who insisted that Scott’s death was his own fault for running away from Slager in the first place. But those posters were often shot down by people who insisted that even if Scott was wrong to run, it did not warrant Slager’s response. One woman who used racist terms to describe people who protest officer shootings said that while Scott shouldn’t have run, even she had to admit that “the shooting was total overkill.”

Slager’s trial ended Monday, when the jury deadlocked over whether or not to convict. One juror told the judge that he could not “in good conscience” even “consider” a guilty verdict. The prosecutor has vowed to re-try Slager, and he still faces other, related criminal charges that could land him in prison.