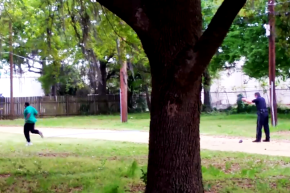 Michael Slager, a former South Carolina police officer who fatally shot an unarmed man in the back, walked out of a Charleston courthouse a free man on Monday after a jury failed to convict him of any crimes. He was on trial for the death of Walter Scott, who was running away from Slager when the officer fired eight shots at his back, killing him, following an April 2015 traffic stop.

Slager’s defense hinged on a 30-year-old Supreme Court decision that says a law enforcement officer is justified in using deadly force against a fleeing suspect if he or she finds probable cause to “believe that the suspect poses a significant threat of death or serious physical injury to the officer or others.” The language is vague, and essentially provides officers the discretion to determine what is and isn’t a “significant threat.”

That decision, Tennessee v. Garner, is referenced frequently when a law enforcement officer kills someone while on duty. But now, another case currently working its way through the court system could potentially change the criteria for what constitutes a “significant threat” for which a cop is justified in using deadly force — and upend how we think about cases like the Walter Scott shooting.

Last week, a three-judge panel from the 9th U.S. Circuit Court of Appeals breathed new life into a lawsuit against the University of Arizona Police Department over a 2010 incident involving an officer shooting a woman four times while she was in her driveway and carrying a knife. The panel reinstated the lawsuit after a lower court issued a summary judgment in the case in favor of the officer. At the heart of the case: whether there was a significant threat that justified the use of deadly force.

The incident, which occurred in May 2010, involved University of Arizona PD’s Cpl. Andrew Kisela and Amy Hughes, who had previously been diagnosed with bipolar disorder, according to court records obtained by Vocativ. Kisela responded to a 911 call to the Tucson Police Department asking for an officer to conduct a wellness check at Hughes’ address after it was reported that a woman was hacking a tree with a knife.

When Kisela and his partner arrived at the scene, they found Hughes exiting her house with a large kitchen knife in her hand. The blade, records show, was pointing backwards. Also at the scene was Sharon Chadwick, who lived with Hughes and was familiar with her mental condition. As Hughes approached Chadwick, the officers drew their guns and told her to drop the knife. When she didn’t, Kisela shot her four times, wounding but not killing her.

Kisela later told investigators that he saw Hughes raise the knife in a way that indicated she was going to stab Chadwick. Chadwick, however, denied that the knife was ever raised, and said Hughes was composed and not a threat to anyone when the police arrived at the house. Chadwick told investigators that she didn’t think Hughes understood what was happening when the officers asked her to drop the knife and that she would have given the knife to Chadwick had she asked for it. But, Chadwick told authorities, she didn’t have a chance to ask her friend for the knife, as less than a minute elapsed from the time police arrived to when Hughes was shot.

In its reversal, the 9th Circuit panel, in an opinion written by Judge William Sessions, found that Hughes’ version of the story could potentially convince jurors that Kisela did not have a reason to use deadly force, and that a judgment in the case never should have happened without it being tried.

“Police are required to consider what other tactics if any were available, and whether there are clear, reasonable and less intrusive alternatives to the force being contemplated,” Sessions wrote in the opinion. He added, “The facts, viewed in Ms. Hughes’ favor, present the police shooting a woman who was committing no crime and holding a kitchen knife. While the woman with the knife may have been acting erratically, was approaching a third party, and did not immediately comply with orders to drop the knife, a rational jury — again accepting the facts in the light most favorable to Ms. Hughes — could find that she had a constitutional right to talk down her driveway holding a knife without being shot.”

The judge’s ruling suggests that “an officer just saying he felt threatened will require more than just the officer’s statement,” said Bill Richardson, a retired detective from the Mesa, Arizona Police Department. “For too long just saying there was a threat has allowed critical questions not to be asked.”

He added, “It could be a good thing. But, we have to be able to believe the police. Unfortunately cases like this are what ruin good law for honest cops.”

Bernard Harcourt, a law professor at Columbia University, agrees — noting that the language in Sessions’ opinion seems to more clearly specify what gives a law enforcement officer justification to use deadly force than in previous case law, including Tennessee V. Garner.

“I do not recall there being a requirement of ‘lesser alternative’ so clearly stated” in prior cases, Harcourt notes. What Sessions brings up —”‘Police are required to consider what other tactics if any were available, and whether there are clear, reasonable and less intrusive alternatives to the force being contemplated.’  That would be the question,” he said.

But, any change at the level of the Supreme Court is hypothetical and far down the road — which means for now, the system we have stands firmly in place. And that system makes it very difficult to convict police officers, even when there’s video of one shooting a man in the back.

Prosecutors have vowed to re-try Slager for his role in Scott’s death.