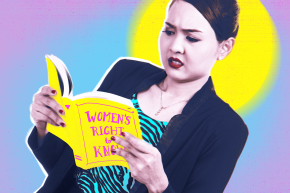 Texas Claims Abortion Is Linked To Cancer, Depression — It’s Not
By Tracy Clark-Flory

Texas Claims Abortion Is Linked To Cancer, Depression — It’s Not

A newly released pamphlet, which women in the state have to receive before having an abortion, is riddled with medical misinformation

Texas officials at the Department of State Health Services just released an educational pamphlet to aid women who are considering abortion. This might come as a surprise, given the state is notoriously anti-choice and recently moved to require the cremation or burial of aborted or miscarried fetuses. But, well, the pamphlet, titled “A Woman’s Right To Know,” is actually full of misinformation. It misleadingly or falsely links abortion to breast cancer, depression, and death, and uses non-medical terminology, referring even to an embryo as a “baby.”

The state requires that the pamphlet is given to any woman interested in having an abortion, and an updated version was released by the Texas Department of State Health Services on Monday. It includes a section titled, “Mental Health Risks,” which cautions, “Women report a range of emotions after an abortion. This can include depression or thoughts of suicide.” In truth, the American Psychological Association convened a task force to look into the research and concluded that there was “no credible evidence that a single elective abortion of an unwanted pregnancy in and of itself causes mental health problems for adult women.”

Another section headlined, “Breast Cancer Risk,” warns, “Your pregnancy history affects your chances of getting breast cancer. If you give birth to your baby, you are less likely to develop breast cancer in the future. Research indicates that having an abortion will not provide you this increased protection against breast cancer.” According to the American Cancer Society, having a child before the age of 20 does decrease a woman’s breast cancer risk compared to women who never have a full-term pregnancy or who give birth after age 30. So, not all pregnancies are equal in terms of their potential to reduce breast cancer risk — and few, if any, experts would recommend that girls rush to give birth as teenagers so as to decrease their breast cancer risk. The ACS reviewed the available research on the topic and concluded, “At this time, the scientific evidence does not support the notion that abortion of any kind raises the risk of breast cancer or any other type of cancer.”

The “Death” section warns that “you have a greater risk of dying from the abortion procedure and having serious complications the further along you are in your pregnancy,” which is especially ironic considering Texas state laws have actually forced women to delay their abortions. Texas both requires a 24 hour waiting period before a woman can terminate a pregnancy and in 2013 passed the restrictive HB 2, which caused more than half of the state’s abortion clinics to close, leading to delays and women having to travel farther for procedures.

What’s more, the Centers for Disease Control calls deaths associated with legal abortion “rare events” that occur in fewer than 1 per 100,000 procedures. Compare that to the risk of childbirth: In 2012, there were 15.9 pregnancy-related deaths per 100,000 live births. As Grossman points out, Texas’ maternal mortality rate is even higher, with 40 deaths per 100,000 live births — but, of course, the pamphlet doesn’t warn women about the much higher mortality risk of moving forward with a pregnancy.

Then there’s the simple fact that the pamphlet uses the term “baby,” even to refer to embryos under 8 weeks of development. “It’s very biased, non-medical language,” said Grossman. “It sounds like it’s pretty much meant to make women feel bad about their decision.” The pamphlet also suggests that fetuses can feel pain throughout pregnancy, which is not true.

The upshot of this pamphlet is not just that it saddles women with stigma and guilt. Grossman points out that the pamphlet also has potential policy implications for the future. “It promotes misinformation about abortion and contributes to the public’s misunderstanding about the safety risks associated with abortion,” he said. “That in turn contributes to the public’s belief that there needs to be more regulation of abortion.”