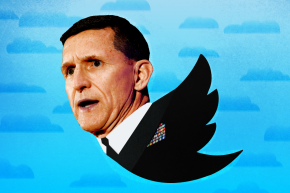 Lt. Gen. Michael Flynn’s penchant for tweeting seemingly any pro-Trump, anti-Clinton news that comes his way — veracity of those stories be damned — wasn’t enough to keep Donald Trump from tapping him to be his national security advisor last month. Now Flynn and his dubious tweets have been reeled back in the spotlight after a man allegedly brought a gun into a pizza place because he believed a conspiracy theory much like the ones Flynn tweets — and which Flynn’s son, who is said to be advising him and Trump, has supported on his own Twitter account.

Edgar Maddison Welch, who has since been charged with assault with a dangerous weapon, told police he was “self-investigating” online rumors that child sex slaves were being held at a Washington D.C. pizza parlor with tenuous links to Hillary Clinton (Welch told police that he did not find any children there). These rumors have been fueled by publicity from Flynn’s own son, Michael Flynn Jr., who has continued to tweet seemingly in support of the conspiracy theory. While the elder Flynn himself has not tweeted about so-called “#Pizzagate,” he has tweeted other conspiracy theories about Clinton as well as fake or greatly falsified news from less-than-reputable outlets. He has also retweeted messages from alt-right figures that were blatantly anti-semitic and Islamophobic.

This would seem to be somewhat odd behavior from someone who will soon be one of Trump’s top advisors. Well, don’t worry: one of his friends is defending him with everyone’s favorite method of eschewing blame for irresponsible tweeting practices: RTs are not endorsements.

In a Politico article, a “retired Navy officer and one of Flynn’s acolytes in military intelligence” named Graham Plaster said that no one should take Flynn’s shares and retweets that seriously, because it’s Twitter.

“Anything that gets retweeted or shared is done casually,” Graham told Politico. “Anyone who assumed more than that is walking on ice. Twitter is a different context than reading a speech and in some cases things are taken out of context based on how limited the character count is. There is no opportunity to explain yourself.”

Airplane manufacturer Boeing appears to be learning that right now, as a tweet from the incoming president on Tuesday morning demanded that the “order” to build a new Air Force One be canceled because costs were “out of control.” Boeing, an American company that provides thousands of Americans with gainful employment, saw its stock price fall almost immediately after Trump’s tweet.

Most people in positions as important as the ones that Flynn, his soon-to-be boss Trump, and even Flynn Jr. (though there are now reports that he is no longer working on the transition team) are about to be in refrain from tweeting just anything that pops into their heads or crosses their Facebook timelines. But that was then. This is the future. The role of nations security adviser does not require Senate confirmation.