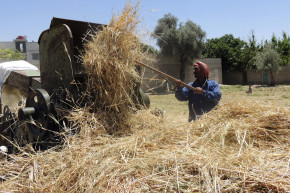 The Syrian War’s Massive Footprint, As Seen From Space
By Alasdair Wilkins

The Syrian War’s Massive Footprint, As Seen From Space

The human cost of the Syrian crisis is already beyond easy comprehension, with an estimated 0.5 million dead and millions more forced to flee. That kind of mass upheaval changes not only people’s lives but also the land itself — in ways that go beyond bombings alone.

A team of Stanford researchers, in a new paper, looked at satellite images and saw the scope of the devastation. The researchers found that nearly half of the irrigated land in the Yarmouk River basin is now gone, and only about half the previous amount of water is stored in the region’s reservoirs. The changes appear to have been most drastic in 2013, when refugees began fleeing Syria en masse, which suggests human migration had a particularly big impact on a region’s water resources.

The Yarmouk River flows southwestward into Jordan, one of the few countries even more water-poor than Syria. The two nations have made a series of agreements over the past few decades as to how much water should reach Jordan, but Syria’s heavy irrigation of the river — both legally and illegally — has left Jordan well below its agreed-upon water supply. The collapse of irrigation in Syria means more water is now flowing into Jordan, but it’s still well below what the country ought to receive. Besides, whatever benefits come from the extra water in Jordan are considerably less than extra costs of the millions of Syrian refugees who have fled to their southern neighbor.

As the researchers note, water and other fundamental resources lurk on the edges of many geopolitical conflicts and wars. They point to how a drought between 2006 and 2008, itself in part a result of overusing water for irrigation, helped worsen conditions in southern Syria.

“The Syrian civil war was sparked by riots in the southern city of Dara’a, located in the Yarmouk River basin,” they write in the paper. “Poor crop yields in Syria led to the collapse of the agricultural sector and large-scale migration to urban areas, contributing to economic hardship, political instability, and ultimately, armed conflict.”

And while it’s relatively straightforward to understand how, say, a dam being blown up can alter irrigation, or even how a drought can lead to riots in a suddenly overcrowded city, the connections between conflict and water go even deeper —in this case, operating on a scale so vast that it can only easily be seen from outer space.