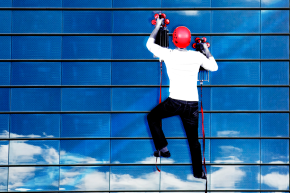 With this device, people could scale walls with ease

The Spider-Man fantasy has finally been realized, thanks to an initiative of the Defense Advanced Research Projects Agency (DARPA), the Pentagon’s R&D agency.

The Department of Defense calls the program Z-Man, because — as DARPA technology leader Eugene Choi told Defense Tech in 2014 — “Spider-Man” was already trademarked. According to a DARPA announcement at the time, the goal was to “develop biologically inspired climbing aids” to allow gear-carrying soldiers to climb walls made of normal construction materials.

The initiative did study how spiders walk on walls, but researchers put most of their focus on lizards, especially the gecko — “one of the champion climbers” in the animal kingdom, as Z-Man program manager Matt Goodman said in a statement. “The challenge to our performer team was to understand the biology and physics in play when geckos climb and then reverse-engineer those dynamics into an artificial system for use by humans,” he said.

One of the first developments to come out of this initiative was Geckskin. Created by scientists at University of Massachusetts Amherst in 2012, Geckskin is a gecko-inspired adhesive that can hold up to 660 pounds on smooth surfaces and then easily release. The secret of the material, and geckos’ feet, is weakly attractive forces that bond one molecule with a neighboring molecule, allowing Geckskin to adhere reversibly.

Two years later, DAPRA demonstrated a paddle that used Geckskin-like material called MicroHold to allow a human to climb a glass wall. During the demonstration, a 218-pound climber carrying a 50-pound pack slowly ascended 25 feet of vertical glass. But the paddles, developed by Draper Laboratory, were unwieldy blocks about the the height of a forearm and the width of a bicep.

On November 30, that same lab announced the latest iteration of the gecko tech. The new model combines the MicroHold material with suction cups to allow for a stronger adhesive in a smaller device that can be easily carried on the battlefield. Pistons attached to stirrups hang from these two hand-held devices. When the user steps down into the stirrups, the pistons engage the suction cups and the unit sticks to the wall. Once the climber lifts their leg, the suction releases. Thanks to this mechanism, the device requires no power to operate.

With this device, anyone can climb vertically or horizontally on a glass or metal surface. While this technology only works with flat, non-porous surfaces, Draper has also developed a SpineHold system, which attaches to rough surfaces like concrete through insect-inspired tiny claws that hook into minuscule crevices, and MagnetoHold, which can hold 500 pounds on a magnetic wall. “Each one attacks a different climbing challenge — for scaling glass, brick, concrete, metal, and many other surfaces, ” William McFarland, one of the lead developers at Draper, told Vocativ. He is confident that all three of these systems will one day be available in a single device.

But it may not be long before we start to see these technologies used by civilians. Often DARPA technology quickly makes it out, through licensing, into non-military applications. “On the commercial side, Draper is in active talks with a few businesses who are interested in bringing our Z-Man devices to the commercial market and using them for a wide range of uses,” McFarland said.

That could make it a lot more difficult for President-elect Donald Trump to keep activists off his buildings.