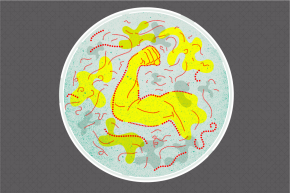 Public health officials are openly worried about so-called “superbugs,” or bacteria that have developed resistance to all antibiotics used to treat them. These have mostly been a problem in hospitals, but now researchers have found evidence of such resistance in a pig farm. The discovery suggests we’re moving a step closer to the end of antibiotics.

The Centers for Disease Control and Prevention has declared the strain of multidrug-resistant bacteria, called CRE (or carbapenem-resistant Enterobacteriaceae), an urgent hazard to public health. That’s because they are resistant to carbapenems, an antibiotic often used as the drug of “last resort” when dealing with the most tenacious infections. Once bacteria become resistant to carbapenems, they are effectively impossible to treat, killing as many as half of all people who get them. CDC director Tom Frieden once referred to it as the “nightmare bacteria.”

These multidrug-resistant bacteria primarily affect people in hospitals who are already seriously ill, but there’s no reason this resistance couldn’t eventually spread, since the resistance-carrying gene can be easily transferred by free-floating strands of DNA called plasmids. Veterinary researchers at Ohio State University wanted to better understand how serious a threat this might be, and they spent five months taking environmental and fecal samples at a pig farm.

To their surprise, they discovered some of those carbapenem resistance genes in the samples they took, suggesting the conditions for superbugs do exist at that farm. So how big a deal is this? That’s hard to say, according to lead researcher Thomas Wittum, because they just looked at one farm, and there’s no way of knowing if this is representative of a much more widespread of antibiotic resistance.

More Superbugs Would Exist Even If We Stopped Abusing Antibiotics

“The answer is that we don’t really know yet,” lead researcher Thomas Wittum told Vocativ in an email. “If this is a single rare occurrence that doesn’t happen at any other farms then it will hopefully never be much of an issue. But if the same thing is happening on other farms, then the risk is greater.”

There’s good and bad news here. On the one hand, the researchers found very little evidence of the gene for multidrug resistance, and what they did find was limited to where sows gave birth to piglets, as opposed to the section where pigs were fattened for slaughter. The researchers stress that there’s no evidence the resistance gene ever entered the human food supply or that there’s any immediate threat of that occurring.

But the mere fact that the gene was discovered at all is unnerving. This particular farm population hasn’t had any new pigs introduced since the 1960s, meaning this genetic resistance is likely the result of changes within the population as opposed to some rogue contamination from the outside.

One possible explanation for this resistant lies in the use in pig farms of an antibiotic related to carbapenems. The intensive use of this antibiotic in piglets may create conditions for more dangerous carbapenem resistance. A way forward is to only use the antibiotic on sick animals, rather than on all newborn piglets. And, more generally, we likely need to start monitoring farms as well as hospitals for signs of superbugs before they become something we can’t control.