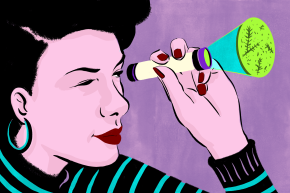 Makers Of At-Home Microscope Claim It Can Predict Female Fertility

A few days before Helen Denise’s 40th birthday, she woke up in the middle of the night with a stabbing pain in her abdomen. After being rushed to the hospital, she discovered that she was unwittingly pregnant — with a fertilized egg that had implanted in her fallopian tube. Denise, who preferred not to use oral contraceptives and had been relying on the rhythm method, went into surgery for the life-threatening condition, known as an ectopic pregnancy.

Once she recovered, her boss, who lived in Europe, told her that overseas they had a better way for her to track her fertility and prevent pregnancy in the future: an ovulation microscope. It’s a device that uses magnification to help detect signs of ovulation in a woman’s saliva — and, thanks to Denise, a new version is coming soon to major stores in the U.S.

It was the first time Denise had ever heard of such a thing. All she knew were the fertility-tracking devices that were then popularly available in the U.S.: pee-on-a-stick ovulation kits, which measure the surge of luteinizing hormone (LH) ahead of ovulation, and basal body thermometers, which can reveal a rise in temperature coinciding with ovulation — both of which come with certain inconveniences. But her boss explained that ovulation microscopes, which had already hit the consumer market in Europe, were an easy, reliable, and cost-effective way for a woman to tell when she was entering her fertile window, the five days within ovulation when a woman is most likely to conceive.

Now, 16 years later, Denise is selling KNOWHEN, a microscope the size of a tube of lipstick, as a fertility tracking device. Ironically, given how she stumbled upon the idea, it’s primarily marketed as a means of helping women to get pregnant. It’s available online, through her website and Amazon, at the cost of $49.99, and will be hitting store shelves early next year. First thing every morning, a woman has to place a drop of her saliva on the mini-scope’s slide, wait for it to dry, and look for a fern-like pattern to emerge. That’s because the estrogen spike that happens ahead of ovulation is associated with a rise in sodium chloride, which can crystalize and cause a fern-like pattern to form on the slide.

“You know exactly when you are ovulating — not just the day of ovulation,” says Denise, who is from Russia but now lives in New Jersey. “You can pinpoint the whole ovulation cycle.”

Several similar devices have come out over the years, but Denise claims her product is of a higher quality than what has come before — and also that there is greater interest and openness right now to a product like this. “Five, six years ago, when we didn’t have social media, women didn’t openly discuss this problem,” she said. “It was a different world.”  Now, women gather on online message boards to discuss fertility tracking trips and Facebook groups to support one another through their battles with infertility.

Not only that, but it’s also a time of innovation around products that help women try to get, and avoid getting, pregnant. The fertility app market has exploded — despite the fact that these approaches are largely unreliable — and now there’s a Swedish app promising to function as a birth control method. There are even smartphone apps that prescribe oral contraceptives. You can even order up a sperm donor via an app.

In the fashion of technology disrupting old institutions, KNOWHEN feels a bit like a refreshing break from the frilly and pastel world of fertility-related products. Instead of watching your pee soak into a test strip only to, through a mysterious chemical process, create one or two pink lines, you get to really see the results yourself on a microscope slide backlit by a green light. As Denise puts it, “You’re really understand your body,” she said. “This is the most natural way to check.”

But ferning microscopes, as they are more technically called, are not without their scientific critics. Richard Fehring, a professor emeritus at Marquette University College of Nursing who has researched and published on the topic, says these microscopes are a relatively inaccurate way to track ovulation. “There’s some correlation, but it’s really not specific in regards to tracking fertility,” he said. “I don’t even know why a woman would want to spend time with this when there are such better things available that are a lot more accurate.”

An illustration showing how KNOWHEN results are interpreted.

He points to a 1999 study suggesting that pee-on-a-stick-type tests, which measure LH levels, dramatically outperform ferning tests. Researchers used ultrasound, which can objectively determine when a woman is ovulating, to check the reliability of various fertility-tracking techniques. They found that, according to the ultrasound, LH testing detected ovulation 100 percent of the time. The tracking of cervical mucus, which changes throughout a woman’s cycle, jibed with the ultrasound results 48.3 percent of the time.

After years of campaigning on Denise’s part, the Food and Drug Administration cleared KNOWHEN for marketing — although the FDA warns more generally about these kinds of tests that not all women “fern,” some fern inconsistently, and that the appearance of ferning might be impacted by a number of factors, including how saliva is placed on a slide. A study using ultrasound found that KNOWHEN had a positive predictive value of 93.3 percent and a sensitivity of 96.5 percent. It’s worth noting that the study was published in a journal held by OMICS Publishing Group, which has been accused of being “predatory,” for allegedly charging high author fees, and had its journals’ peer review process questioned.

Denise argues that her product is better for planning a pregnancy than urine strips, which can be pricey and wasteful when used month after month: a woman typically pees on a stick and then discards either a test strip or the whole thing every day that she wants to check her fertility. “The biggest issue is you need to buy it each month,” she said. “It’s not cost-effective.” (KNOWHEN has no disposable parts.) Plus, since it detects the LH surge, which lasts for only 48 hours, it only gives women a small window for conception.

KNOWHEN currently has just over 30 reviews and three-and-a-half stars on Amazon. Most of the reviews are positive — as one woman wrote, “I was so excited to see the ferning pattern this morning! Definitely more affordable than using ovulation strips and less of a guessing game. I would totally recommend this item as a low cost addition to the baby making, or body learning arsenal. Now on to the baby dance!”

But then there are those who are waiting and waiting to see a ferning pattern. “I’m just not sure about this,” wrote on commenter. “I have used it for 2 cycles now and I can’t find a discernable [sic] pattern.” To which Denise herself responded to suggest that the woman might not be ovulating every month, which is possible even with regular periods.

She says she’s encountered no resistance from women who are averse to having to spit on a slide or peer into a glowing microscope to interpret results. Denise, who points to the popularity of saliva testing for everything from DNA to HIV, argues that women are ready for this sort of direct approach to understanding their bodies. “It’s the 21st century,” she said. “Stop guessing. Nature gave you the answer — the answer is in your saliva.”