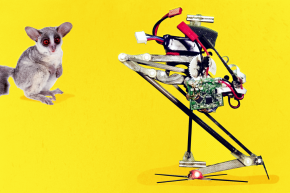 A New Robot Jumps Higher Than All The Rest

About as high as LeBron

Robots are not known for being agile. Present them with rough terrain, like rocky ground or stairs, and most will stumble and fall, unable to get up on their own. That’s not particularly useful if a robot needs to navigate that terrain for an important mission, like performing search and rescue after a fire or building collapse.

Now a new type of robot designed by engineers from the University of California at Berkeley may start changing that reputation—it can jump higher and faster than any robot yet.

The researchers had a couple of different inspirations. One was a little mammal called the galago, also known as a bush baby. It can stay crouched for a long time, then spring into the air and fly higher than its muscles would be able to propel it without the use of elastic tendons to amplify the muscles’ power. They were also inspired by parkour, the sport of using constructions that are typically barriers, like walls, as a way to propel movement through a space.

The robot the researchers created, described in a study published Tuesday in Science Robotics, is flat on top with a diagonal piece that moves towards a wide, four-pronged base, looking sort of like a leg with the hip attached. The prototype, named Salto, has a motor and spring in its “hip” that bends and releases the carbon fiber leg. The spring in particular allows Salt to store power before a jump.

In a series of tests, Salto could jump to more than three feet in just over half a second from a total standstill. That’s nearly a foot above the vertical leap of a typical basketball player (though it’s about tied with LeBron James’ 40 inches of jumping height). Propelling itself from the floor to a wall and jumping off that, Salt could get even higher.

To compare Salto’s agility to that other robots and animals, the researchers devised a metric based on the height, speed, and frequency of the jump. By that metric, Salto outperforms any other robot ever made, and even some animals such as humans and several types of frogs.

But Salto is still not as agile as a bush baby — it’s only at 78 percent the agility of its mammalian inspiration. And it’s still a ways away from being useful in real-world search and rescue efforts. For now, it’s too small to, say, remove debris or physically extract victims, which would be most useful in those types of emergency situations.

In future iterations, the researchers intend to explore more of Salto’s physical capabilities, stringing together a series of jumps to navigate in more natural environments (and also make its movements look a lot more like parkour).

“In the future we’d like to be able to take a map of an environment and extract from that places to jump, good spots for jumping, then be able to direct Salto about to jump, how high, and how far,” Duncan Haldane, one of the researchers leading the project, in a video.