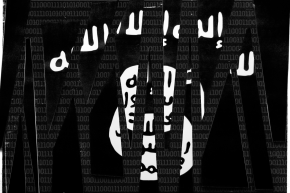 In the wake of the campaign to retake Mosul, the terror group is calling for individuals to attack where they live

The Islamic State introduced its new spokesman, Abu Hassan al-Muhajir, in an audio message on Monday — and he wasted no time calling for bloodshed around the world in the terror group’s name.

The 24-minute clip, released on the terror group’s Furqan Media group, was shared on social media channels used by ISIS. The spokesman, Al-Muhajir, urged ISIS “soldiers and supporters around the world” to ramp up their “blessed operations” inside their countries. “Attack them inside their houses, markets, roads, and clubs and burn the land under their feet,” he says, referring to the citizens of countries outside ISIS’ control.

Last week, The ISIS-linked Amaq News Agency has claimed responsibility for the car and knife at Ohio State University that injured 11 people — although it’s not clear the group had any role in planning or directing the attack.

The Iraqi military is currently engaged in an operation to retake the ISIS-held city of Mosul, one of the terror group’s major remaining territorial strongholds. Al-Muhajir called the offensive “unprecedented” and suggested that ISIS will continue directing lone wolf-style attacks around the world, even as their land holdings are under attack. U.S. Defense Secretary Ash Carter said Monday that he believes the U.S.-supported Iraqi mission could retake the city before Donald Trump takes office.

The previous ISIS spokesperson, Abu Muhammad al-Adnani, a leading figure inside the terror organization, was killed by a U.S airstrike near Aleppo in Syria this August.

Around 100,000 Iraqi soldiers, along with Kurdish Peshmerga security forces and Iranian-backed Shiite militias, are engaged in the fight for Mosul, which began nearly two months ago. The Islamic State has held the city since summer 2014.

ISIS fighters hit back against Iraqi forces in the last two days, exploiting cloudy skies which disrupted U.S.-led air support, Reuters reported. The Jihadi militants carried out a series of attacks against the elite Iraqi troops spearheading the offensive in eastern Mosul, and attacked security forces to the south and west of Mosul.