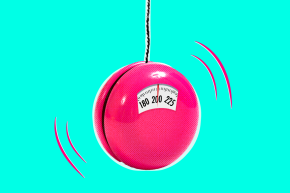 A new year is fast approaching, which means countless people are resolving to lose weight — and, inevitably, many are going to fail. Why are dieters so bad at shedding pounds and keeping them off?

A new model suggests it’s not a failure of willpower, or even of our conscious minds, but rather something much deeper in our evolutionary history.

Many people who lose weight will ultimately regain it — sometimes with interest — but that doesn’t tell us the actual reason our bodies want to take back excess weight and the health risks that come with it. For the body’s response to make sense, there has to be some value to excess fat that justifies the potential problems with being overweight.

That’s where the evolutionary argument comes in: As humans evolved, they couldn’t always count on a constant supply of food — unlike today, when our problem is that food is everywhere and our trouble is moderation. Our subconscious brains, optimized to deal with the deadly threat of famines and shortages, don’t know that McDonald’s is just around the corner.

British researchers at the University of Exeter and University of Bristol created a mathematical model to better understand how an animal would respond to sudden, unpredictable food shortages. They found that animals that experience sudden shortages should, if they want to survive, binge when the food supply returns to normal — since they can’t ensure future food supplies.

Excess fat could be the only thing that lets the animal survive the next famine, and a creature in the wild is probably going to burn that extra stored energy in short order. But a dieting human is dealing with purely self-imposed food shortages, so the brain’s evolutionary directive to gain extra weight is no longer a good strategy.

Yo-yo diets that are on- and off-again could be particularly bad because they would convince the brain that shortages are commonplace, creating an urge to overeat in preparation for a next big famine.

The researchers note that not everyone will regain weight after going on a major diet, which they say might be because of different underlying food expectations. Some people might be subconsciously less worried about the sudden food scarcity, and so their bodies don’t go into overdrive to regain lost weight. There could also be a genetic component, they speculate, based on food availability to our ancestors. This could also explain why some ethnic groups have a greater risk of obesity.