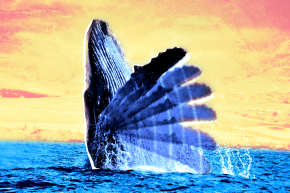 Humpback Whales Are Actually Talking To Each Other With Their Tails

Humpback whales are already famous for their haunting underwater songs. But while that communication is beautiful and complex, humpbacks may use more simple ways of getting their point across when at the surface. As a new study finds, humpbacks just really like to slap the water when getting a message to their neighbors. The tremendous sight of a breaching whale could really be a key way they communicate.

Whale songs are often misunderstood to be used as a means of long-distance communication. But only males sing, suggesting the purpose is more specific, perhaps a mating display. For other communication, humpbacks make simple short-range sounds, and it turns out a big part involves slapping the surface of the water with their tails or entire bodies. What might look like random play when whale watching is in fact structured, repetitive behavior.

Researchers at the University of Queensland in Australia set out to chart for the first time just what humpbacks are saying with their different ways of slapping the ocean.

Perhaps the most dramatic behavior by a humpback is breaching, when it jumps out of the water completely, often performing a twirl before crashing into the water. The slap can be heard over long distances, which fits with what the researchers found — that breaching occurred most often when the nearest neighboring group of whales was at least 4,000 meters away, suggesting the humpbacks are signaling distant whales. It didn’t seem to matter what nearby whales were doing, which supports the idea that breaching is all about communication between groups, rather than within them.

As for slapping tails or fins against the water, the humpbacks did this when whales were either splitting off from a group or joining another. In some way, hitting their tails against the water might help direct how whales reorganize themselves. The activity was more common around young whales, suggesting it’s also about play for little humpbacks. Of course, that leaves open the question of whether young humpbacks do this just to have fun, or if it’s as practice for communicating when they grow up.

The whales most often got up to these behaviors when in shallower waters — possibly because humpbacks have to focus on long migrations in deeper water, leaving little time for socialization. But it’s also possible that this difference is because different whales have different hangouts. Mothers and young humpbacks tend to prefer the shallows, which may offer them greater protection.

It’s clear that these behaviors mean a lot to the whales. After all, much of it happens when the humpbacks are fasting, and it takes a whole lot of energy to repeatedly slap the water or do a bunch of jumps and twirls. Considering how much it must take out of them, humpbacks are almost certainly trying to say something when they hit the water, even if we still haven’t translated it.