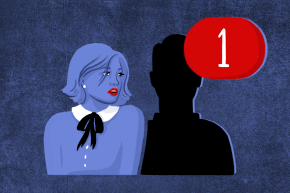 When Your Rapist ‘Friends’ You On Facebook
By Tracy Clark-Flory

Last week, a user took to Reddit with a post titled, “When your sexual abuser likes a photo of you as a kid on Facebook.” She claimed that an extended family member had abused her as a child, and here he was “liking” a family photo posted by her mother. Within 24 hours, the Reddit user’s post had garnered thousands of upvotes and more than 500 responses, some of them from people with their own stories.

One woman wrote, “My sexual abuser just messaged me on Instagram after 8 years … and it read, ‘Do you remember me? I hope so.’” Another said, “When I had my rapist try to add me on Facebook 5 years after the fact, all I remember was feeling my stomach in my throat and blocking him right away.”

These women are far from alone. Twitter is filled with hundreds of tweets from people with similar stories — about everything from a sexual abuser “liking” their Instagram photos to Facebook suggesting their abuser as “a person you might know.” Blog posts and personal essays abound on the topic, with headlines like, “My Rapist Just Sent Me a Friend Request” and “My Rapist Friended My Dad On Facebook.” It isn’t the first time this phenomenon has shown up on Reddit, either. For some survivors of sexual assault, social media has made it harder than ever to forget about their abusers.

“It can be an additional consideration for survivors in their healing, and depending on where they are in life, who their friends are and what they are sharing, it can be a hurdle,” said Kristen Houser, chief public affairs officer of the Pennsylvania Coalition Against Rape, which somewhat regularly encounters concerns about these kinds of social media encounters.

Jade, who tweeted about receiving a friend request from her rapist, told Vocativ, “It felt a bit dehumanizing in a sense. I never confronted him about the matter, but I don’t think he was exactly ignorant about what happened.” She was raped after passing out from drinking alcohol and taking Xanax.

It doesn’t require an abuser to reach out or click “like” on a photo, either. The simple algorithmic suggestion of a new friend on Facebook can bring someone right back to the abuse.

That’s what happened for Meagan, who tweeted about seeing her rapist pop up as a friend suggestion on Facebook. “Seeing his face took me right back to those moments,” she said via DM. “And seeing his face mixed in with people I do know was surreal. Even though we live in the same city and we know some of the same people, it’s hard to think of him as a regular person who’s on Facebook and living a normal life. I only know him one way.”

More Why Rape Survivors Are Sharing Their Stories On Snapchat

These reminders, small as they might seem, can be hugely unsettling. Houser points out that survivors can be easily triggered by anything that reminds them of the assault — from hearing a song on the radio to smelling a particular cologne. “If you are online, enjoying your friends and personal communication and suddenly the face of the person who assaulted you intrudes and disrupts, it is essentially the same thing,” she said. “In addition to creating the somatic responses of feeling panic or terror, it can also lead to anxiety — how did they find me? Why are they so brazen to contact me? Are they watching me? Am I in danger again?”

Then there’s the feeling of betrayal when discovering that one’s sexual abuser has dozens of mutual friends.

When 23-year-old Paige’s rapist showed up as a “person you might know,” she found that they had 26 friends in common. “It was scary. Seeing his image and seeing how many people were friends with him,” she said in a direct message.

There is an odd double-edged sword aspect to this sort of immediate access to an abuser. “I wish I had blocked him, so I wouldn’t be able to find this information or look him up whenever the feeling struck,” said Robyn, who wrote on Twitter about her experience encountering in her Facebook feed the man she says raped her. “But I also like that I have a way to see what’s happening in his life, not just wonder.” She added, “I had a narrative in my mind about who he was, and what he was off doing with his life, and I think seeing the reality was helpful in a strange way.”