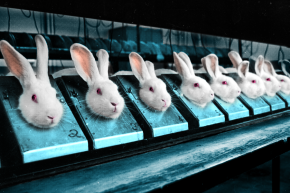 Many Animals Could Be Suffering In The Name Of Flawed Science

If we’re going to use animals in scientific research, what responsibility do we have to their wellbeing? There’s no one answer to that question, but perhaps the very least we can do is ensure that any animal’s distress, suffering, or even death is in service of research that actually pushes science forward.

Many studies that use animal subjects may not be meeting that standard, according to a new study looking at the design of animal trials.

At the most basic level, scientific research is only worthwhile if the results from one study can be replicated. That’s particularly important in animal studies, where the goal is often to demonstrate a result before trying to show the same in humans. Researchers have to design and conduct studies carefully to guard against their own biases and other sources of error. The psychology field has been rocked for the last couple years by a reproducibility crisis, in which even some of the most seminal studies couldn’t be replicated, calling their results into question. That’s already a serious issue, and the presence of animals in unreproducible studies adds an ethical question: Why make animals suffer if we’re not even doing usable science?

More Psychology Has A Reproducibility Problem

Researchers at the University of Bern in Switzerland set out to better understand this question by looking at more than 1,200 animals studies the Swiss authorities had approved in the past few years. They found that only about a fifth of those applications offered any description of how the researchers would control for bias — say by randomizing which animals received a medication or blinding the study so that the researchers didn’t know which subjects received what.

It’s certainly possible these studies did take steps like these but they weren’t well described in research applications, and a follow-up survey with some of the scientists involved found that most at least claimed to take such precautions. However, many of the survey participants appeared to be only shakily familiar with actual formal guidelines for protecting against biases and unnecessary risks.

These results don’t necessarily prove that the results of these studies are flawed. But, as the researchers point out, a lack of experimental rigor generally predicts how likely a study is to be reproducible.

More Why Animal Researchers Are Testing Fewer Cats And Dogs

Reasonable people can reach different conclusions about the ethics of animal research. A 2015 poll found that only 47 percent of Americans favored the use of animals in scientific research, compared with 89 percent of scientists. One possible explanation for that huge gap is that scientists tend to think of animal testing as an indispensable part of the scientific enterprise whereas the public at large increasingly see this as a moral issue. Indeed, another poll last year found about a third of the public felt animals should have the same rights as humans, with two-thirds saying they were at least somewhat concerned about scientific research.

Even those who don’t necessarily care about animal welfare have good reason to want well-designed, reproducible studies. As the researchers point out, poorly designed studies with unreproducible results can push entire research fields in wrong directions, wasting valuable time and money — the United States alone might spend as much as $28 billion every year on bad studies.

In a way, these results suggest a grimly compelling argument for treating animals just the same as we would humans, whatever your stance on animal rights. Everyone stands to benefit from better science.