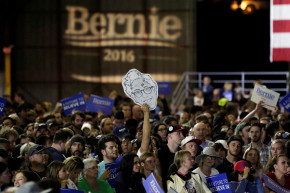 Getting Involved In Politics May Keep Your Mind Sharp

A Bernie Sanders rally held earlier this June in California — Jason Redmond/Reuters
By Ed Cara
Dec 02, 2016 at 11:13 AM ET

A little activism could go a long way toward keeping your mind sharp into your later years—at least so suggests a newly published study in BMC Psychology.

Researchers pored over data from a long-running population study of nearly 10,000 UK residents born in the 1950s, specifically looking for factors that could have influenced their thinking prowess as they aged. The people who said they were involved in a political, religious, or otherwise civic-oriented group at both age 33 and age 50 were more likely to stay cognitively fit. This link held up even after accounting for other important influences on brain health, like education level, wealth, and physical health. The more involved in different activities someone was, the stronger the connection. In total, about 17% of people reported any level of civic activity.

“The implication is that if people continue to engage socially throughout life, maintaining related behaviors that require cognitive skills such as memory, attention and control, there may be some protection from cognitive decline,” said lead author Ann Bowling, a professor of health sciences at the University of South Hampton, in a statement.

To be clear, the boosts to our brain associated with community participation seen in the study were modest. Using the combined score of several different tests as a proxy for cognition and memory, they estimated that every instance of civil service was linked to a 0.12 point score increase. For comparison’s sake, that’s less than the associated effect that was seen with playing sports, staying in good physical health, and having a higher-skilled job, among others. Even simply being a women was more advantageous.

Still, because the authors used data from a large study that’s, to this day, keeping track of people from birth until death, it’s more likely that the benefits they saw are at least real. Elsewhere, plenty of other research has shown the lifelong value of keeping our social ties strong, particularly with our closest loved ones. So if nothing else, this latest study might provide that final push to start getting more involved in whatever activist or political group floats your boat. Something tells me there might be an upswing of those in the near future.