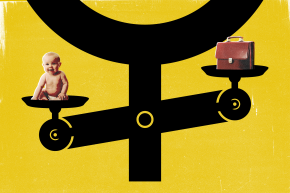 The ‘Motherhood Penalty’ Gets Worse As Women Earn More

Among the most privileged women, every kid means kissing 10% of wages goodbye

Studies have shown, time and again, that a woman’s earning potential takes a hit when she has a kid. In fact, research suggests that the income disparity between mothers and non-mothers is even bigger than the pay gap between men and women. But does this so-called “motherhood penalty” affect all women equally?

A new study set out to test that question and came up with some surprises.

You’d expect that privilege would protect against the motherhood penalty. It turns out, however, that the opposite is true. Among white women only, the most well-paid and highly-skilled see the biggest hit for bearing offspring: a 10 percent loss in wages for each kid that they have.

The study, published in the American Sociological Review, analyzed data from 1979 to 2010 from the National Longitudinal Survey Of Youth. Researchers used data on the respondents’ wages and cognitive skills, which were measured using results from the Armed Forces Qualifying Test, to assess the impact of privilege on the motherhood penalty. The paper focuses on white women, and only briefly touches on black women, in part because not enough women of other racial groups were surveyed to yield useful data.

More Women Earn More When They Wait To Have A Baby

Overall, the researchers found that highly-skilled white women whose wages landed in the 80th percentile lost 10 percent in wages for each child that they had. This was a much bigger penalty than that experienced by white women who had lower skills or lower wages, or both, which was between 4 and 7 percent.

The study explains these counterintuitive findings by pointing out that highly-skilled, high-earning white women’s wages grow dramatically based on their experience. That means that when they take any time off for motherhood, they lose out on a period of strong wage growth.

Let’s please not forget: Privileged white women may face a higher motherhood penalty, but they are still privileged white women. “Even after they become mothers and suffer the steepest penalty, they are typically affluent because their own earnings are still relatively high, and many of them are married to high-earning men,” said lead author Paula England, a sociology professor at New York University, in a press release. “Given their relative privilege, we might still want to give priority to policies, such as child care subsidies, that help low-income women.” I’d venture more than just “might.”