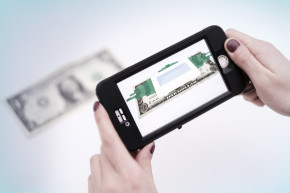 In a bid to get kids interested in politics, the White House is channeling Pokémon Go with a new augmented reality app called 1600. The app allows users to view a 3-D model of 1600 Pennsylvania Avenue on the surface of a dollar bill (dollar bill not included).

By hovering over the image of George Washington using the device’s camera function, users can watch simulated action unfold while learning about the history of the White House through the narration of Press Secretary Josh Earnest. Using augmented reality features developed by Nexus Studios, users get to “experience” the animated White House exterior (sans gates) as seasons change and special events like Easter Egg Roll are held. The interactive platform also allows users to access hidden features by tapping on various parts of the White House, like Secret Service agents surveying the scene from the roof.

In an interview with the Verge, White House director of product Josh Miller said that the intention if for the educational tool “to feel fun, like a game.” While the jury’s still out on whether or not Pokémon Go was actually effective in teaching young users about nature and conservation, augmented reality is making gains as a potential learning tool in areas like anatomy and construction.

The 1600 app is the first augmented reality feature to be released by The White House, but maybe it won’t be the last. Under President Obama (an apparent fan of virtual reality), a competition for virtual and augmented reality learning tools held by the White House was announced last month. President-Elect Trump may have virtual reality ties, too: the founder of Oculus Rift, the maker of a VR headset, was a big supporter.